Ugh. I didn’t want to have to write this post, but, I feel like I need to address the elephant in the room. More for you than for me. Yes, … END_OF_DOCUMENT_TOKEN_TO_BE_REPLACED 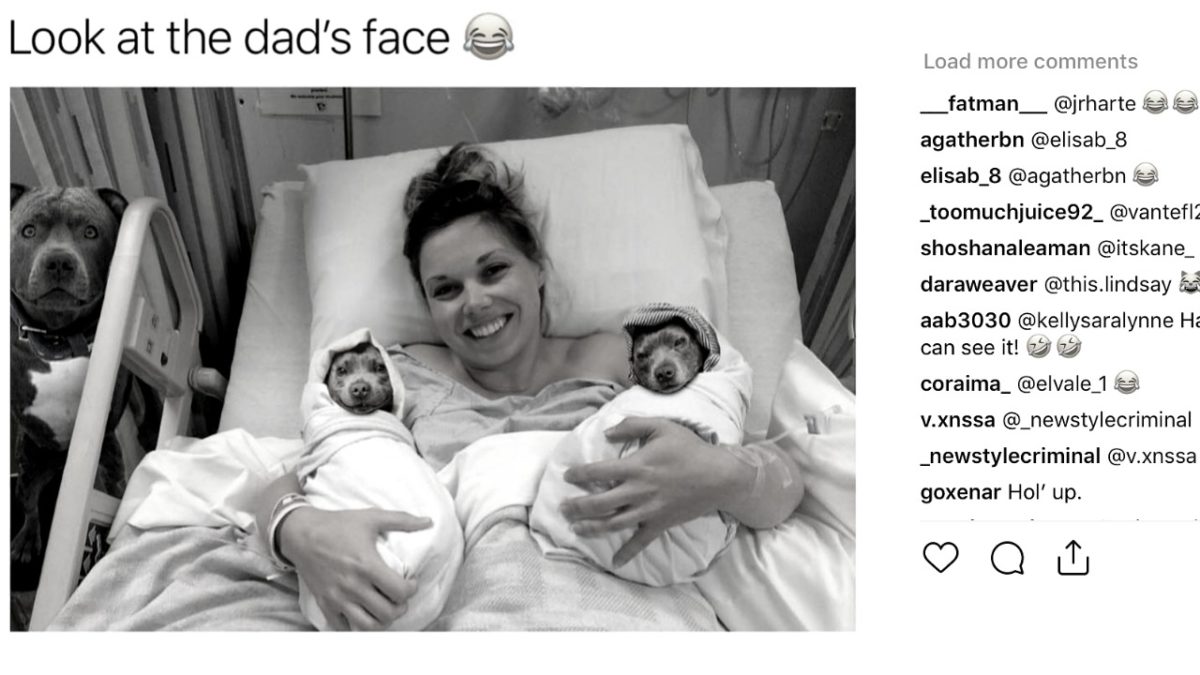 I didn’t want to have to write this post, but, I feel like I need to address the elephant in the room. More for you than for me.

Yes, that meme of a woman in a hospital bed who just had twins, but is photoshopped with two puppies and a dog is me.

Yes, my photo was stolen.

Let me start at the beginning.

Last spring, Mike turned to me a couple days before I was leaving to California for work and said, (with an “I have to tell you something” look in his eyes), that he’d come across a meme of me. He proceeded to tell me that he stumbled across a meme made of one of my photos.

He figured out that it had been stolen and used in a Reddit competition where the person photoshopped Mike and our twins out of the photo from my twin birth blog, and replaced them with dogs. Then the photo was stolen from Reddit and turned into a meme.

“Here we go again,” was the first thought that came to mind.

You see, I’ve had photos stolen before. Some along with full articles I have written. They’ve been published on big sites that you would be shocked to hear, either used for ads, or views.

I’ve had photos of me with my big pregnant belly stolen and circulated through pregnancy fetish groups.

I’ve even had my pregnancy ultrasounds stolen before by people faking a twin pregnancy. This one has oddly happened more than once.

Each of these times Mike has sent a scary, “we are going to send our lawyers after you,” letter which has resulted in the photos being taken down.

So when I was shown this harmless meme, which didn’t include my kids and was actually kind of funny, I acknowledged the skill of the photo-shopper who won the Reddit contest, that I was thankful that our kids weren’t in it and admitted it was annoying that once again my photo was stolen.

But the meme had gone viral. It was too big to take down, and I had a choice to make… do I fight this? Or do I have a chuckle and an eye-roll and get on with my day?

I chose the latter.

To go after it and have it taken down would require spending hundreds of thousands of dollars on lawyer fees and even then it might not be taken down. Listen to this podcast from Criminal and someone else’s experience trying to do just this: Criminal Podcast – Homewrecker.

I chose to be a blogger and a content creator. I chose to share my story and my photos. This career isn’t for everyone. But it is for me.

I am an open-book and a storyteller. My passion for telling my story was born from a place of loneliness and longing for connection during my twin pregnancy. I get that sharing my story also means that I am opening up my life to opinions, and exposure.

I have thick skin.

For me, putting up with comments, the occasional troll and being turned into a meme, is better than heading to a 9-5 everyday. I tried that, and it didn’t make me happy. This job does. Sharing my story with others and maybe helping them through a dark place makes it worth it.

I am used to the internet at this point and it’s devious ways. I’m okay putting myself out there. But you better believe I am going to be fiercely vigilant when my kids start using social media, which by the way is a long ways away.

I totally get why you would feel exposed if that were your post delivery photo vandalized and shared millions of times. You didn’t choose to share your story as publicly as I have.

I so appreciate that you want to tag me, screen shot it and fill my DM’s inbox letting me know about this injustice. But let me save you the time…

So, what can you do about it? How can you help? If you want to tell a publisher that it is a stolen photo and they don’t have permission to use it, go for it! If you want to report the photo on Instagram and Facebook as stolen, please do! Thank you by the way, because this really does help.

But please resist tagging me, or letting me know.

In the meantime I’m good, sitting here in the meme hall of fame, sharing my story and building a supportive community.