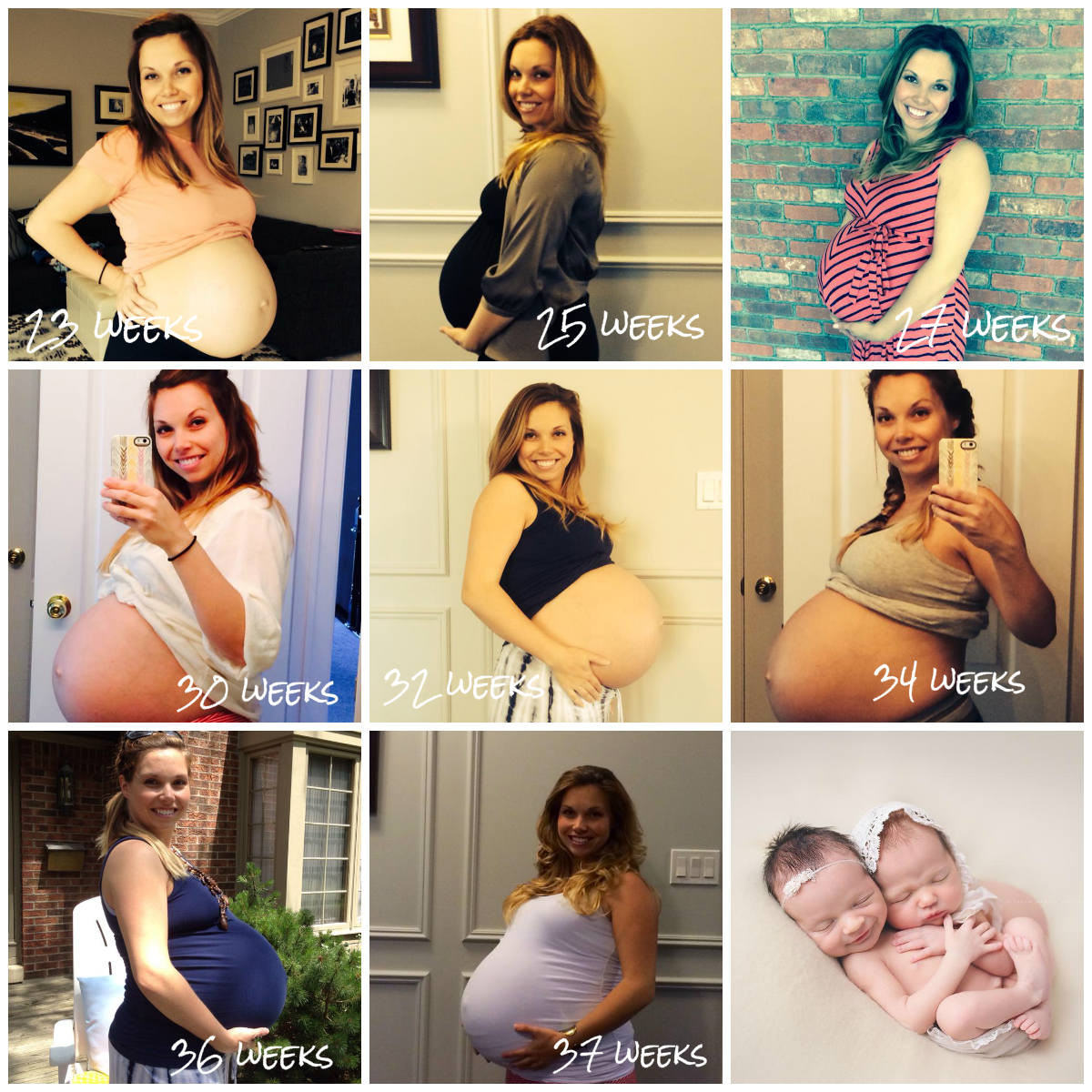 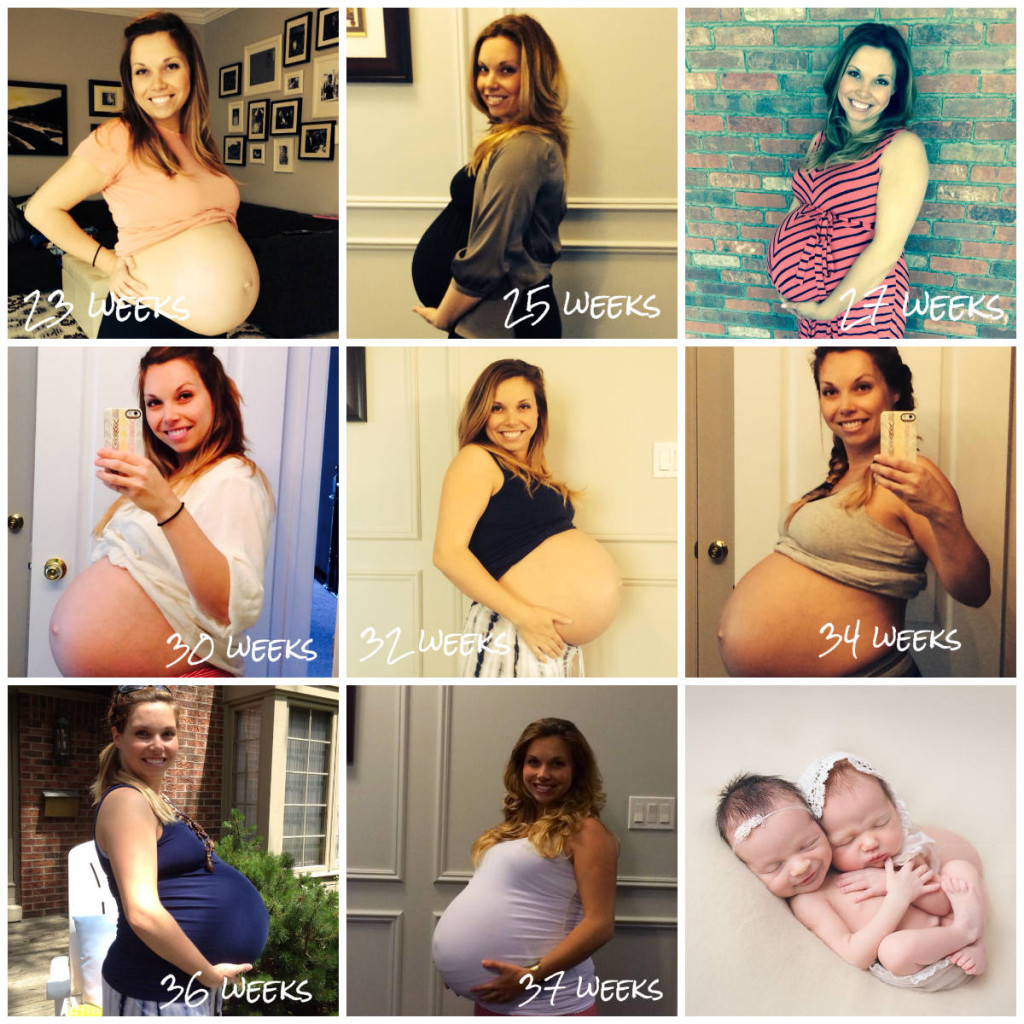 There is a curiosity about a pregnancy with multiples.  It’s understandable.  A body is creating more than one person at once.  Not only is there the mind blowing fact that (in my case) multiple eggs have been fertilized, your body then knows to create two placentas, two amniotic sacs, more blood, more amniotic fluid and your skin and muscles can stretch and stretch!  It truly is amazing. I have read that people who’s bodies produce multiples are more evolved than others.   I am not sure if I buy that.  I personally think that God has a hand in every pregnancy, one baby or more.

When I was told that not only was I finally pregnant after a year of struggling with secondary infertility but there were in fact two little people growing inside of me, fear didn’t set in.  At least not until later in my pregnancy when I could barely move without fainting and I knew that I had two older children depending on me.  But the idea of twins joining our family only brought myself and my husband Mike feelings of joy and excitement.  For the first couple weeks I assumed I was in shock and that the fear would come… it never did.

Before knowing I was pregnant I had suffered from a bout of stomach flu.  I thought it had passed and then come back again.  Then the nausea wasn’t lifting.  When the pregnancy test came back positive it explained the nausea.  Only this was very different from my two previous singleton pregnancies (that’s lingo for carrying one baby – you become fluent with these terms when pregnant with multiples).  When pregnant with my older two the nausea would come in waves.  Often triggered by smells; meat, perfume and cigarettes. But this time the nausea was unrelenting.  It was also getting worse every day and contrary to the term “morning sickness” it would go into overdrive starting at 4pm and by the time 9pm rolled around I was having my daily vomit session before bed which would bring just enough relief to get through the night.  I remember calling my mom crying saying this was nothing like my previous pregnancies which I had enjoyed.  We chalked it up to me now being in my thirties this time around.

Twins had never crossed my mind in my previous pregnancies.  Most of my friends had commented about the thought of twins before heading in for an ultrasound, but I never did. But this pregnancy there were a couple of times I commented to Mike in passing, “maybe it’s twins”.  Then we would quickly dismiss that thought because when I had my multiple pregnancy blood tests week 4 there were no unusual levels with my HCG levels (we had started to explore my infertility before getting pregnant hence the extra tests).  Even the morning before my 7 week ultrasound I commented again about the possibility of twins because of my nausea.  Mike nicely said to put that thought out of my head.  But after peeking at my ultrasound after my tight lipped technician left the room and saw what looked like owl eyes (two sacs) staring back at me my heart started to race.  Once taken into a private room and an exceedingly kind nurse explained that I was pregnant with di-di twins (dichorinic/diamniotic which means separate sacs, separate placentas and they don’t share blood vessels, again more twin lingo).  I was reassured that this was the safest type of twins to carry and that most likely they would be fraternal but because they were spontaneous that there was a very small chance that a fertilized egg has split really early creating identical twins… something that we wouldn’t be able to confirm until they were born.

One of the first things I did after finding out we were expecting twins was search the internet for pregnancy belly photos with twins.  I wanted to see what a freak show I would become.  While scouring Pinterest and other websites I came across a variety of belly shapes.  Pointy, wide, low… it truly became an obsession of mine.  I had been through two singleton pregnancies and I thought I was huge then.  I just couldn’t fathom that my body could possibly carry two babies! 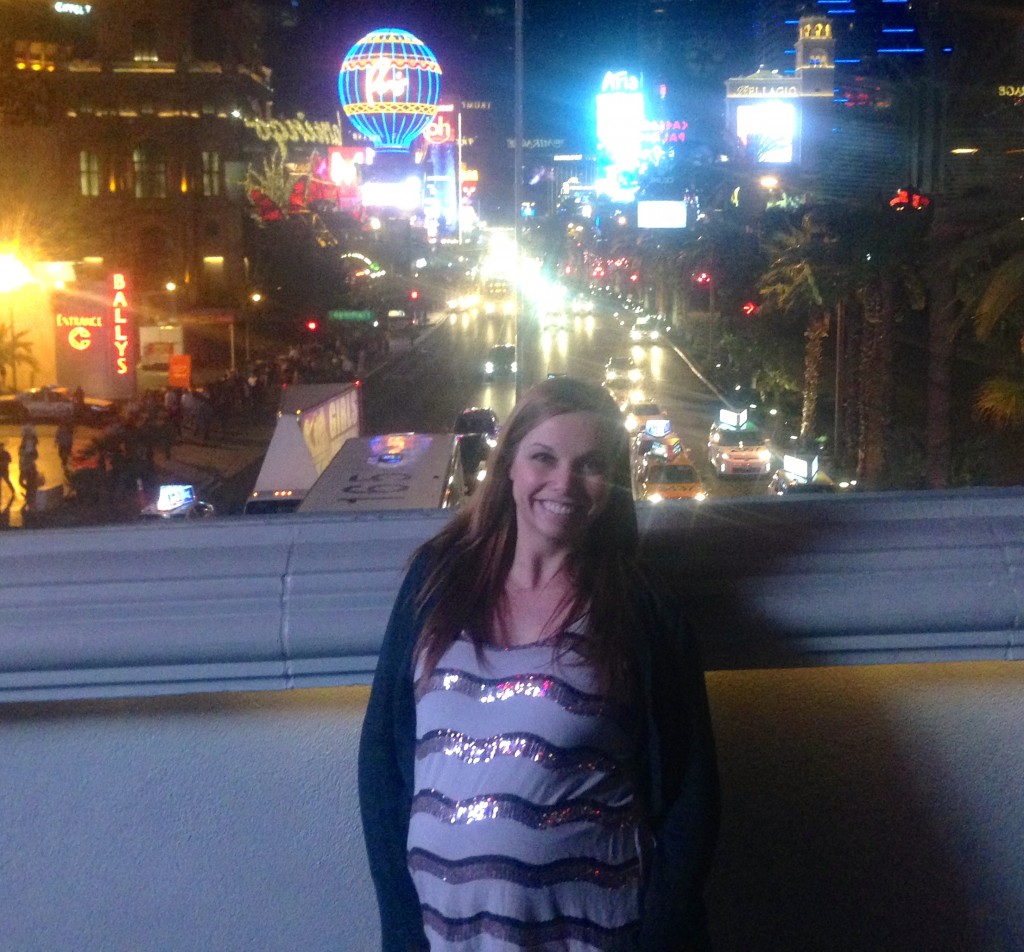 My version of a maternity vegas outfit complete with sparkly bling!

Although we thought I had to wait until my 18 week ultrasound what our babies’ sex were (I was convinced it was one boy and one girl) we got a huge surprise at my 16 week ultrasound… both were girls!!! 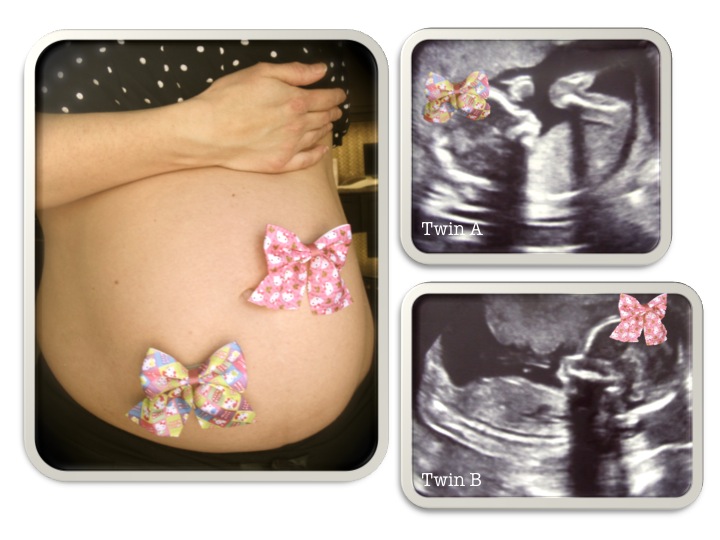 Once I got past 20 weeks the weight of my belly was incredible.  This was the point that I was connecting with other twin mamas online and the most common horrible symptom we were all experiencing was excruciating hip pain.  I used a super sexy support belt which helped take the weight off of my hips but near the end of my pregnancy I had to stop using it because it was making my wicked heartburn ten times worse. 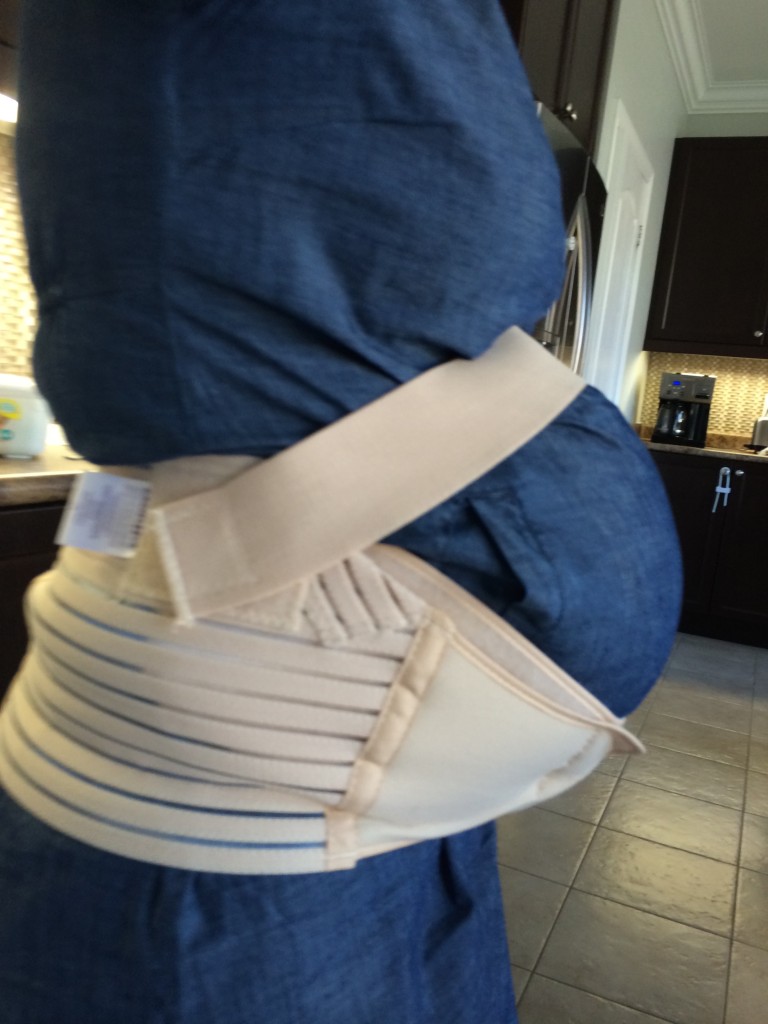 My bump would take many shapes. But the biggest difference between carrying twins vs singletons was I always felt “high” and “low” at the same time. I was rocking an egg shape. For the last six weeks of my pregnancy baby A (Mia) was taking up all of the real estate pushing baby B (Everly) up and to the left, past my ribs. Poor thing! 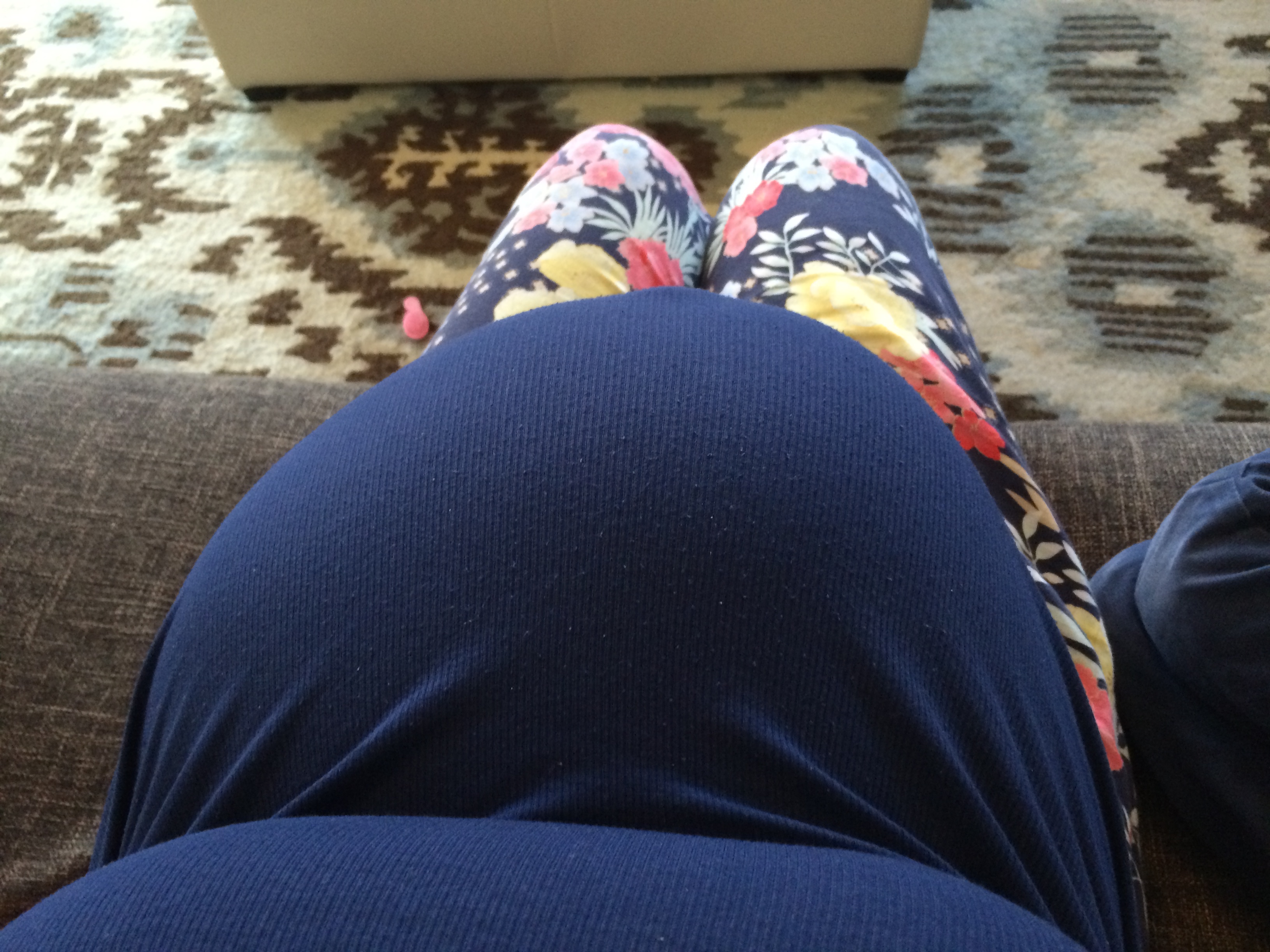 There were days of my pregnancy that I was fighting depression.  Between the crippling nausea in my first trimester to the chronic pain I experienced the rest of my pregnancy there truly were some dark days.  It didn’t help that the first half of my pregnancy I was very isolated inside with bored children trying to survive one of the most brutal winters Canada has seen in years.  I tried to pamper myself as much as possible and emerged myself in TV series after TV series.  Later in my pregnancy I started feeling like my entire day consisted of moving from bed to sofa to bath to bed to bath to sofa and so on.  The two things that got me through those last weeks were getting outside in the sunshine (even if it was just lounging by a pool while eating and watching everyone else have fun) and my weekly ultrasounds and non-stress-tests reminding me that all of this suffering was for a very good reason. 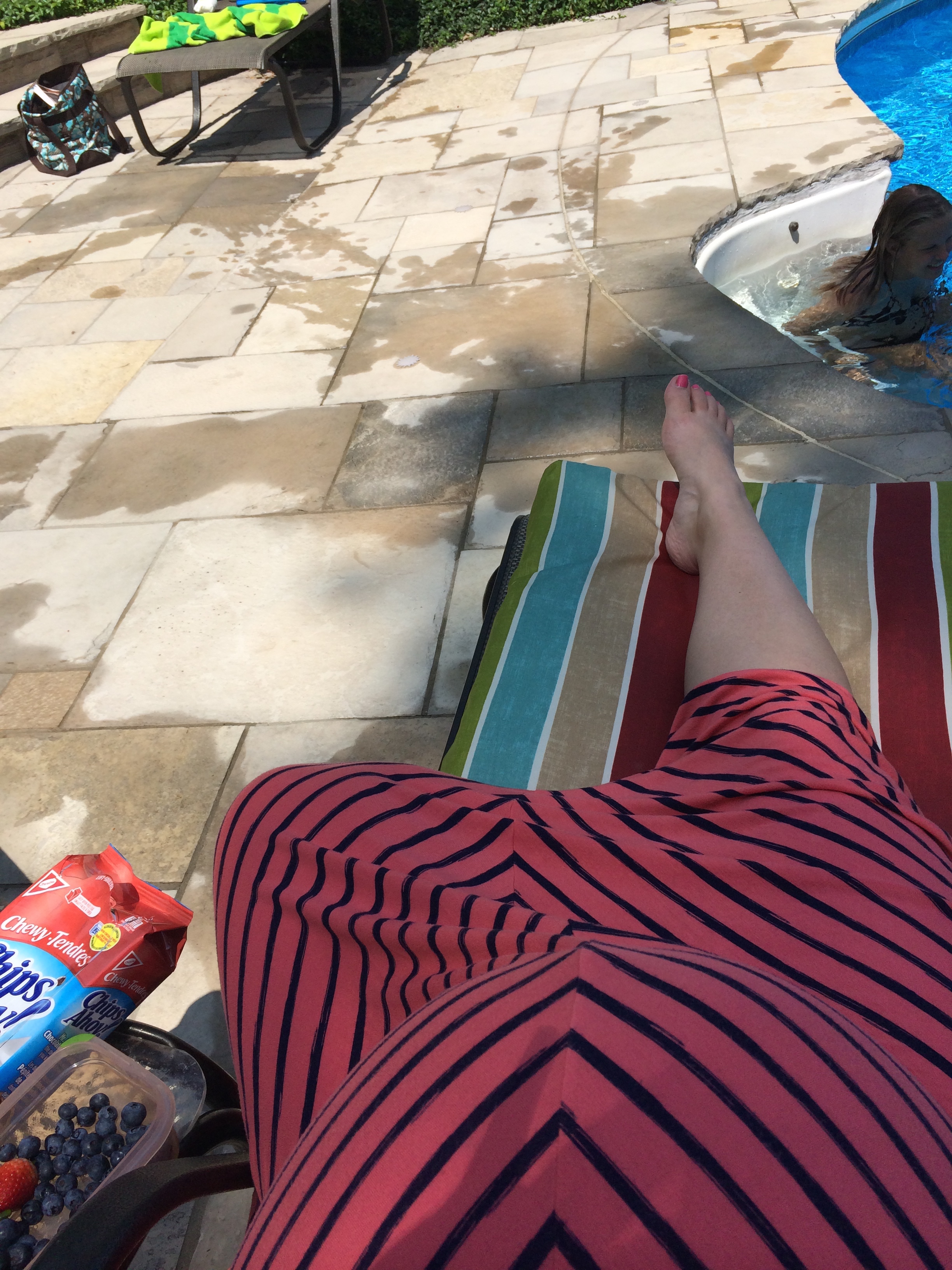 Oh and pedicures… lots and lots of pedicures! 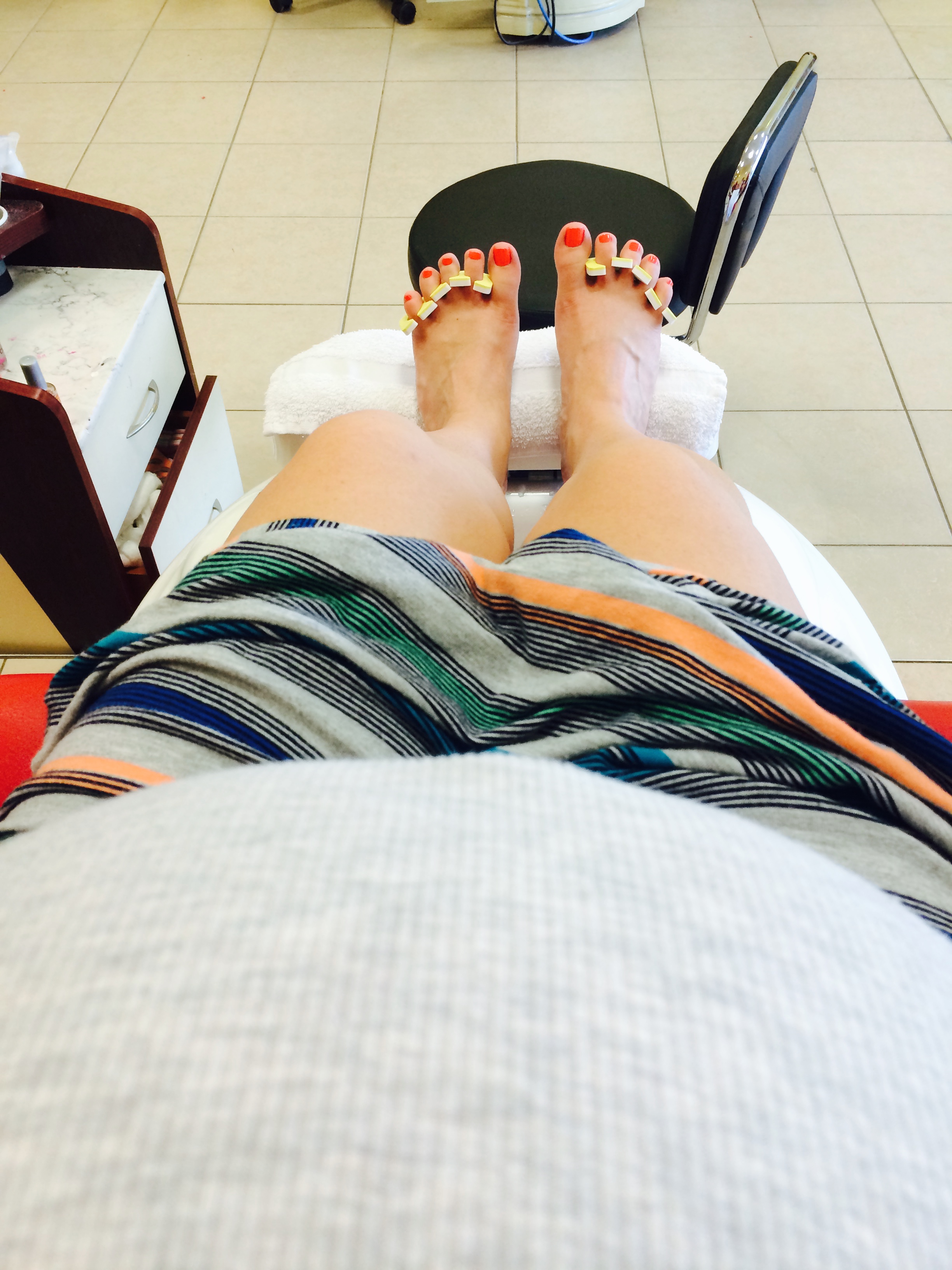 I started to get creative with my parenting.  Although I was getting a lot of help from family when Holden wasn’t at school and Beau wasn’t at nursery school there would still be a few hours a day while Mike was at work that I had to parent on my own.  I would make everyone snacks and the kids beds on the floor while we would enjoy a movie together.  That way I could rest with a pillow between my knees to get a bit of relief. 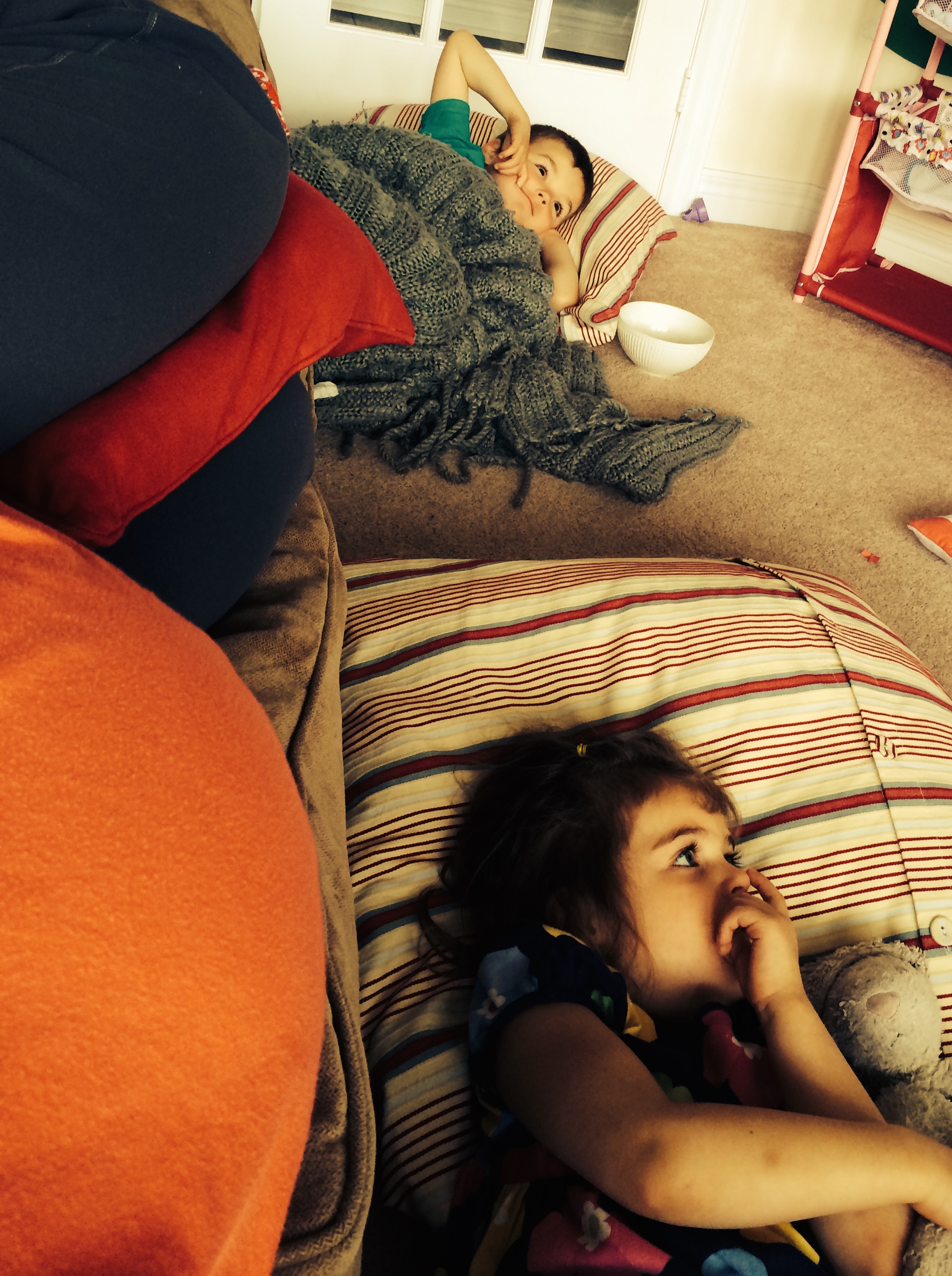 Walking up the stairs would put my heart into overdrive and I came very close to fainting multiple times a day.  I was experiencing pre-syncope (almost fainting) and feeling like my heart was going to explode brought me into the hospital a few times around 33 weeks and I was subjected to a battery of tests.  In the end it showed that my heart was having runs (racing) at times but the babies were thriving so I had to keep on trucking.  The weight of my belly forced me to stay off my feet almost all the time… even in the shower I had to sit on the floor.  It was very hard! 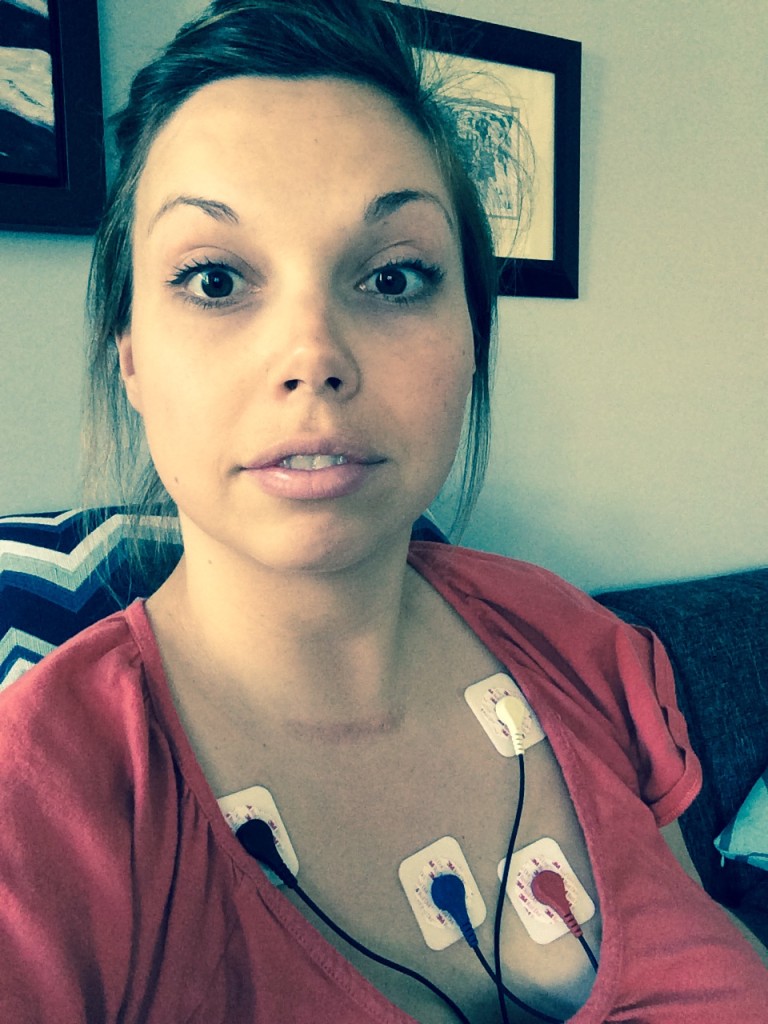 This is my attempt at a selfie facelift

By 35 weeks I had a couple of really scary episodes of pre-syncope while driving complete with tunnel vision.  I decided that I couldn’t drive any more during my pregnancy and relied on my husband, family and friends to drive me to my remainder of ultrasounds and doctor’s appointments.

During my last week of pregnancy we went out for dinner with friends and headed to an upscale restaurant. After moving us twice because my belly wouldn’t fit into their booths we scored free dessert.  But watching those little feet and fists poke out and react when I poked back made it all worth it.

I finally made it full term.  I truly believe that if I hadn’t had all of that pain that forced me to be off my feet almost all of the time I wouldn’t have made it as far as I did.  It was nature’s way of saying SLOW DOWN!  The relief that I had after my girls arrived via scheduled c section at 37 weeks 4 days was incredible!  As soon as the doctor pulled each baby out and held them up we could see that they were so different from each other and we knew that they were fraternal.  Today I am grateful that I suffered so much during my pregnancy because even on the days when our twin baby girls are fussy and don’t want to sleep, it feels easy compared to when I was pregnant with them! 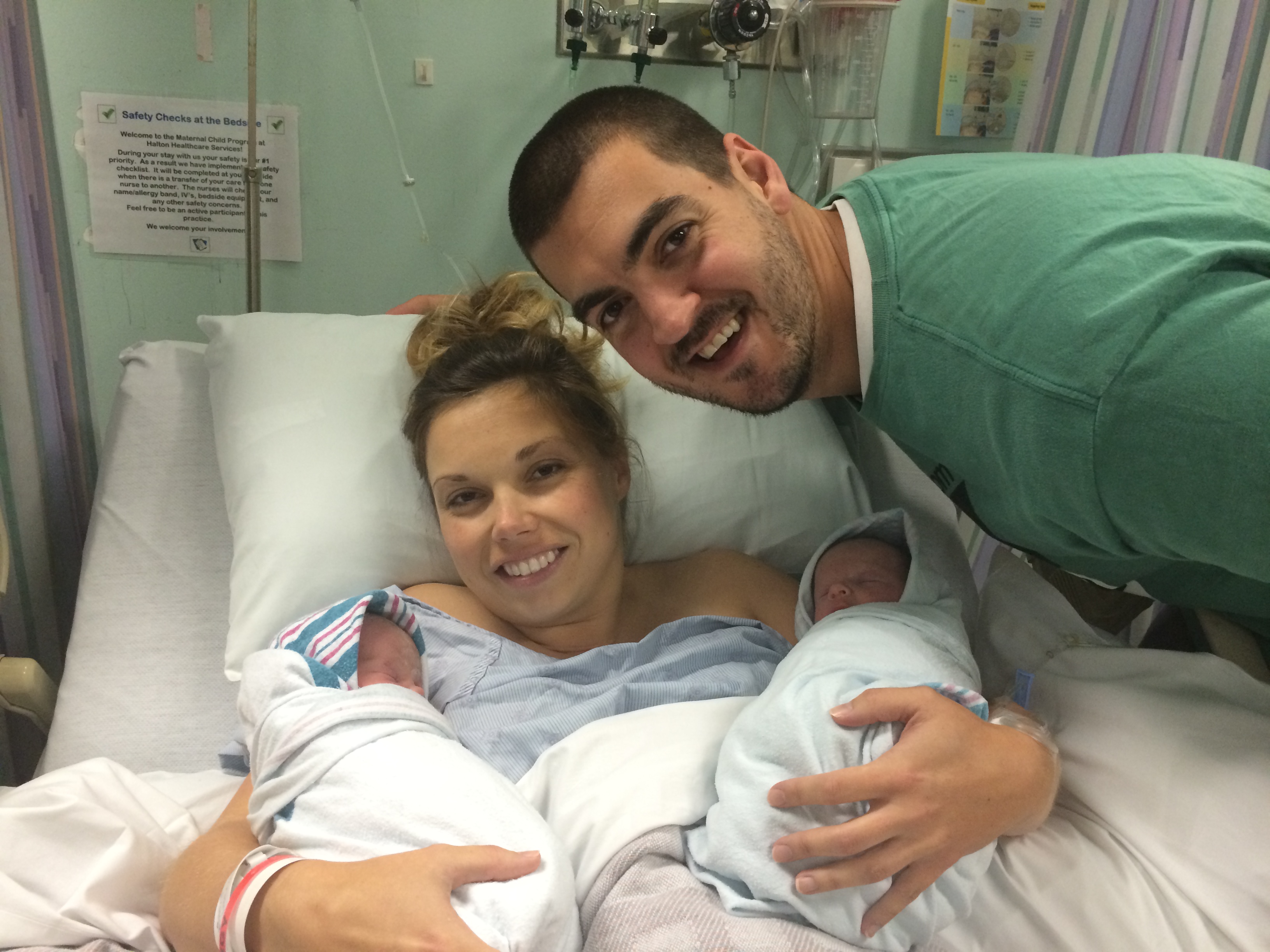 It was so important for me to write this blog post with as much detail as possible.  When I was pregnant with our twins I searched high and low to find a complete twin pregnancy story from a personal perspective instead of snippets here and there.  I hope that this story of my journey with our girls can help other twin mamas to prepare for what’s ahead.  Please feel free to ask me any questions you might have about being pregnant with twins either in the comments section below or via email at info@nestingstory.ca and I would be happy to answer as best I can!   I have blogged about the birth of our girls you can find here.  Please don’t forget to subscribe to Nesting Story and follow on Facebook and Instagram!

I want to dedicate this post to our families.  You were just as dedicated to this challenge as we were and we could not have done it without your help!  Thank you for helping us bring Mia and Everly into this world!