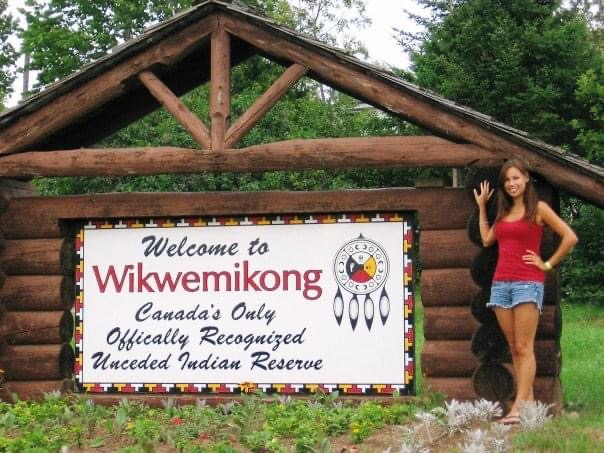 By Fallon Melander (see bio below)

Being Indigenous* was a badge of shame I wore but made sure to tuck it away for no one to see.

For as long as I can remember I grew up just wanting to be like everyone else around me. I longed for blonde hair and blue eyes, I longed for lighter skin and a less “exotic” look. I wished that people wouldn’t look at me in a funny way, trying to place what culture or race bucket I belonged to.

I grew up far away from my home community and not very close to any reserves. I knew that I was Native growing up but the only person who looked anything like me was my mom, with beautiful dark hair, skin and shining brown eyes. Everywhere else I looked I saw whiteness.

My dad is white, with blonde hair and blue eyes, his four siblings and their kids all looked like porcelain dolls. I didn’t get any of those traits other than the signature small Spencer family nose. My mom also grew up in a white family. At age four she was forcibly removed from her birth mother by the CAS (during what is now known as the “Sixties Scoop” era) and eventually adopted into a loving family, but who looked nothing like her and knew nothing about her culture.

My grandmother, my mom’s birth mother, is a Residential School survivor herself and my mother being taken away was just another systemic bullet to “kill the Indian in the child”. I cannot imagine what my grandmother and mom have gone through and the struggle to find themselves along the way. I am thankful that I had my mom to look up to and see her reflection back to myself.

However, she was a second generation child who had been torn away from her home, family and culture. She was clawing her way out to keep any semblance of her native identity with no supports and surrounded by what we know now is white privilege.

I have various memories of outright and covert racism. The kids on the playground who would pretend to carry tomahawks and do “native cries”, family members who would call my mom derogatory names while they thought she was sleeping, being told that my people were drunks, lazy and worthless.

I was taught to be ashamed of who I was. And I wore that badge of shame every day, I just made sure to tuck it away for no one to see. As I grew up I realized that if I wanted to fit in I had to pretend that I was like everyone else. I also realized that the way I looked meant I couldn’t be like everyone else and was constantly asked by people “where are you from?” So I decided to reinvent myself as a more exotic and palatable version for the people of the suburbs.

I never outright denied my ancestry, instead I tried augment it. I wasn’t going to just be Ojibway, but I was going to add in a dash of Hawaiian too. That only lasted so long until my mom outed me.

I was hiding in plain sight but there were so many others too.

About 10 years ago I found out that a schoolmate of mine is Indigenous. He had been adopted into a white family, in the same town my mother had been, which was the town that we grew up in. I never knew. I don’t know if my head was too far up my ass to notice, or if he hid his identity during those years, but I was shocked to find out that throughout my childhood I believed I was the only Indigenous kid at school, when really a classmate of mine was too.

It hurts my heart to realize that I was so disconnected from my culture that I really didn’t know what it meant, other than the negative stereotypes, which as a child I thought were true. The history that I was taught told me that I was a savage, the fact that my mom grew up in a white family told me that her birth family was unable to raise children, and what I saw on TV and in the media were negative portrayals.

Imagine waking up every single day and thinking that you are inherently bad. That you came from inferior people who couldn’t even raise their own children. I lived in fear that I was one day going to be taken away from my family because of it. And I didn’t know any different, there was no one to tell me otherwise, to show me that the destruction of my culture, family and even my own self-worth was because of racist and systemic policies that were in place to do just that.

My heart breaks for my younger self who lived that way every day, thinking that something was wrong with her, but knowing in her heart that what she was told could not possibly be true.

The harm that was done and that I am still trying to undue is difficult.

I continue to hear outright racist remarks and often have to make the decision to speak up or walk away, because it may not be safe. And even now as a grown woman with a law degree I am constantly mistaken as the administrator or junior level associate and am often told “good for you for making it through law school” or “I would have gone to law school too if I got to go for free”.

Micro aggressions are like my daily vitamin some days.

It has not been easy to write this all as it has taken me down a path of reflection and pain. I have been on a journey for many decades to embrace, learn and connect with my culture as an Anishinaabe kwe (Ojibway woman). I also am now a mother to three beautiful children and have a responsibility to show them the strength, beauty and resiliency in our culture and identity.

I went to law school because I wanted to make a difference in ensuring Indigenous voices and communities were heard. I wanted and still want to disrupt the systems that have caused so much pain and destruction and I hope that by sharing a piece of my story you will too.

*Throughout this piece I refer to several names for what describes myself as Anishinaabe (Ojibway in English) There terms include Indigenous, Native and Anishinaabe

Fallon Melander is Anishinaabe, a mother, a wife, a lawyer, and a member of Wikwemikoong First Nation on Manitoulin Island, Ontario. She lives with her husband, young daughter and twin sons in Burlington Ontario.

Truth and Reconciliation Commission of Canada

Ruby Slipperjack, Dear Canada: These Are My Words: The Residential School Diary of Violet Pesheens

Jenny Kay Dupuis, I am Not a Number

David Alexander Robertson, When We Were Alone

National Inquiry into Missing and Murdered Indigenous Women and Girls