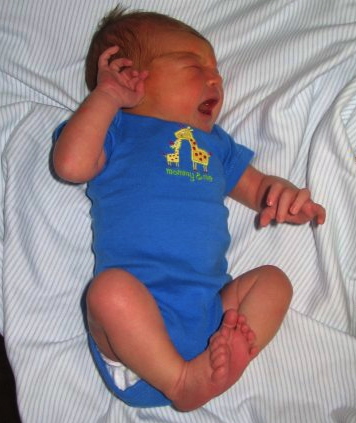 My little guy arrived into the world in a pretty textbook way; my water broke like a water balloon 3 days before my due date and after six hours of labor and twenty minutes of pushing he was in my arms.  He was perfect!  He came out completely pink and ready for kisses.  We were now a proud family of three.

In the weeks that followed my son’s birth we had a parade of family and friends come through our house cuddling and passing around my little man.  My mother would come over often to babysit or just spend time with her first grandchild.  My husband and I were bursting at the seams with our cute and cuddly baby boy.

Then one morning when he was ten weeks old I went into the nursery to go get who I thought was my son.  No, no one actually switched my baby, but they might as well have.  He was miserable and on edge.  After giving him a thorough look over and consulting my mental “is he sick” checklist I came to the conclusion that he was his normal robust self but with an attitude. I decided to get on with my day as usual.  When my mother arrived later that day I was relieved to pass off my little gremlin and get some much needed housework finished.

That was when all hell broke loose!  He howled and howled and did not want anything to do with my mom.  Determined not to give up, my mom told me she was fine, besides, she had survived four babies herself (one who of which was nicknamed Oscar the Grouch for a reason).  I raced out of the house and opted to buy a baby swing which my husband and I up until this point had thought was a load of crap!  After arriving home an hour later and seeing my son was still hysterical, and my mom, the veteran nurse, lactation consultant and mother was exhausted and felt helpless, I couldn’t get the swing put together fast enough.  It helped a bit but until my mom left and closed the door behind her he didn’t quite settle.

That’s when the realization that my baby boy may have a bad case of separation anxiety set in.  Okay, I thought, I could handle this.  Besides, I don’t want to share my little bundle of joy with anyone anyways.  This will pass soon… HA!  I was delusional!

As time passed my son systematically cut person after person out of his life including my husband, which broke his heart.  We were at the point that we couldn’t attend any family functions without feeling like we had been through a war and I had to tell people in the grocery store not to make eye contact with my baby let alone talk to him.  I remember multiple attempts at hosting play dates with my friends and their babies and having to spend 99% of the time hiding upstairs.  My husband and I came up with odd little tricks to keeping him happy while we had visitors like putting him in his high chair with the TV on and a tablespoon of peanut butter… this was not how I pictured motherhood!  I was so isolated and alone.

The breaking point was when my son was 18 months and I was expecting our daughter (a surprise!!!) in a month and I couldn’t conceive how I was going to handle a newborn and a son who couldn’t peel himself off of me.  I started sobbing and panicking to my husband and instructed him to drive me to labour and delivery because I thought I was going to have a nervous breakdown.  Once inside, two angelic nurses sat with me and let me sob and told me their horror stories of their own experiences as mothers.  In conclusion they said, you have to get help, you can’t do this alone.

After heading home feeling like a ton of weight had been lifted off my shoulders, I called around and found a fantastic babysitter who we hired to come a couple times a week.  We started slow with me leaving the room for short periods of time.  After a few months of having our babysitter and my determined mother taking turns babysitting we put our son into a home daycare a few days a week.  I was able to stay home and enjoy some quiet time with my little girl.

After time my son realized that there was a whole world out there and he had been missing out on so much.  Now he is mister social.  He still suffers from some anxiety but the best thing for him is getting out of the house in a school type setting.  If I could go back a couple of years and tell myself a piece of advice it would be, don’t try to be a hero, get help, even if he cries the whole time and this won’t last forever!!!