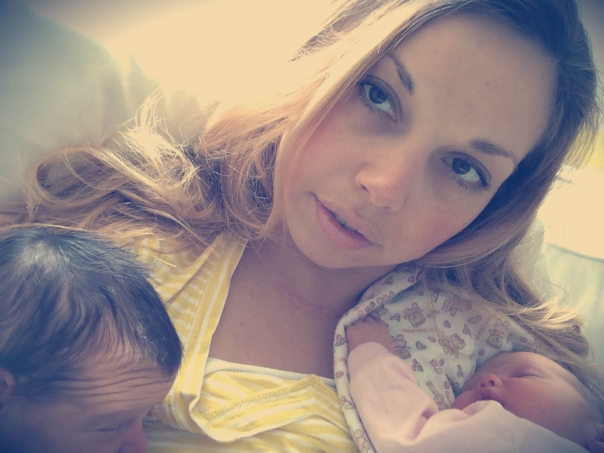 I have had a bit of a mental block these last few weeks. I have enjoyed writing about my twin pregnancy and then their birth but to honestly write about life with our girls was going to require a very honest raw post first. So before you think that our lives with twins have been all rainbows and sunshine I will tell you about a major bump in the road that has since put each day in perspective. I was able to bring these two beautiful, happy and easy-going girls into the world as a very experienced mama. I already knew how to bath, nurse, soothe and care for a newborn and I just had to double up. But three weeks into my girl’s lives I entered into three weeks of my own personal hell. I didn’t just experience a few hectic weeks, I experienced three straight weeks of stress so extreme that it can break a person. So here it is, our story of what caused me to experience postpartum depression and make the very satisfying decision to stop breast-feeding our girls when they were eight weeks old.

When Mia and Everly were born, other than Everly’s quick thirty-minute stay in the NICU for in-drawing, everything was going as smooth as a scheduled C-section can be. They each nursed right off the bat and to the amazement of my team of nurses I had them tandem nursing on the first try.  I had gone into my twin journey determined to breastfeed but okay with supplementing a little with formula if needed.

When we had our first child, Holden, I exclusively breastfed him until he was ten weeks old and suddenly no amount of nursing was satisfying him.  He was a very moody baby and like all four of our kids he had a huge appetite.  No matter what I tried to increase my supply I was never one of those blessed woman who could feed a village with her milk.  Maybe it was my lack of thyroid (I had a complete thyroidectomy when I was 19 due to severe hyperthyroidism and a hyper plastic nodule), but by the time I had exhausted every trick to increase my supply, postpartum depression had start lurking over my shoulder.  So when Holden was 10 weeks old I started giving him one or two bottles of formula a day and still nursed about the same amount as my friends were with their little ones.  I was able to breastfeed both of my older kids with a little formula supplementing each day for six months, which was when I was very ready to finish.

On day three in the hospital with our twins the nurses and pediatricians began to become alarmed with Everly’s weight loss.  There was a bit of confusion as to if her starting weight of 6lbs 3oz (Mia was 6lbs) was correct because of the commotion going on about her breathing issues.  But the scales weren’t lying.  Weigh after weigh Everly, although nursing like a champ, was losing weight until the point that she had lost over 10% of her starting body weight.  In the hospital you quickly learn that 10% is the magic number for alarm bells to go off as this weight loss was a dangerously high.  I was very relaxed about it and quickly agreed with the nurses to start both girls on some formula topping them up after each feed.

We headed home on day four when Everly started to gain a little weight and the following three weeks went by surprisingly well.  Although it was tricky at times to find the quiet and keep the older kids at bay to nurse, I really enjoyed tandem nursing and had a great routine of topping them up with a bottle.  I loved that I could nurse a twin and then pass them off to a family member to be topped off with a bottle.  The girls were sleeping well and I was getting up with them a couple times a night to feed.

Then the diarrhea hit.  What I initially dismissed as frequent breastfed newborn bowel movements turned into over forty frothy acidic bowel movements a day from each twin.  This caused a diaper rash so severe that it covered most of their bottoms right down to the dermis, bleeding at each diaper change.  No matter what diaper cream we tried or amount of air exposed to it, the rash would not improve.  We knew that until the diarrhea stopped the rash wouldn’t go away.  We switched a couple of formulas, which didn’t make a difference either.  They were crying constantly, no really, I mean constantly!

During this time we had a temporary nanny to help with our older kids during the summer months and my husband Mike was wrapping up the biggest project of his career.  This kept him away from home and he was arriving home late everyday for weeks, which was rare for his job.  I was averaging 30 minutes of sleep a night.  Although I was getting a lot of help from family members, I could barely string together a sentence.  I remember lying on the couch for two minutes while my sister-in -law was over helping me.  I was babbling like a delirious sleep deprived lunatic and she was looking at me with very concerned eyes.  I eventually stopped the bedtime help because only I could put the babies to bed and the older kids just wanted mom after the day with the nanny and would start acting up if another outside person was there trying to help.  If I hadn’t been as prepared and organized as I was for twins I would have completely sunk.  It was the perfect storm for postpartum depression.  Although I knew a dark cloud had settled over my head I couldn’t stop for a minute, or else my house of cards would come crashing down.

I started to take action carting my girls into the emergency room with the help of my mom.  The situation was baffling and taken very seriously.  The nurses and doctors couldn’t believe how healthy and hydrated they were despite their chronic diarrhea and contributed that to my sleepless nights of feeding.  Blood and stool samples were taken and our girls were misdiagnosed with a dairy intolerance.  I was falling apart; I could barely hold it together.  I had been through so many stressful experiences in my life but this was the only time that I felt like I was in a pressure cooker and that I might shatter into a million pieces.  Mike and I decided that because he was only a week away from his deadline that he had worked so hard for, we wouldn’t pull the plug.  I was starting to lose hope and began panicking that no one would be able to figure out what was wrong with our poor babies.

Then a nervous doctor called us back into the emergency room and put us in touch with another pediatrician.  This pediatrician dug deeper and asked lots of questions about our older kids including their own diarrhea triggers.  I pointed out that they cannot have apple juice without having diarrhea after.  He explained that he thought our girls could have a Dietary Fructose Intolerance…..  A WHAT?

A dietary fructose intolerance: (not to be confused with a life threatening hereditary fructose intolerance).  Fructose is naturally present in fruits, some vegetables and honey. It is also used as a sweetener in some soft drinks and fruit drinks. When the body doesn’t absorb fructose properly, it is called fructose malabsorption or fructose intolerance.  Fructose malabsorption occurs when the body is not able to break down fructose during the digestive process. When undigested fructose reaches the intestines, it reacts with naturally occurring bacteria and generates carbon dioxide and hydrogen gases, which can cause bloating, abdominal pain, heartburn, diarrhea and gas.  –gastro.org

It’s bizarre and very rare for an infant to have a fructose intolerance, but twins?  It was worth a shot.  The pediatrician raced around researching and making calls to find out what if any baby formula did’t contain fructose.  Most of them do, even many that don’t list it right on the label. Finally, after speaking to a gastro pediatric specialist, he found Earth’s Best organic baby formula.

I left the hospital exhausted and still in disbelief that this could be the answer.  After having our girls on the new formula for a few days we saw an improvement.  I was still nursing but I found myself feeling like a shell of a person.  Between giving so much of my body during my twin pregnancy, my C-section and then the colossal three weeks of stress and sleep deprivation I had endured, I didn’t feel like myself.  While nursing our then six week old girls in the middle of the night I suddenly knew that I had to stop breastfeeding.  Only trace amounts of fructose if any are in breast milk, but it was acting as a natural laxative for our girls.  Between that, me being completely spent and still fighting postpartum depression I made the decision right then and there to stop breast-feeding.  I was certain.  Not a bone in my body had any doubt.  It took two weeks to wean our girls off of nursing.  The diarrhea completely cleared up.  Our girls were happy, satisfied, content and SLEEPING. 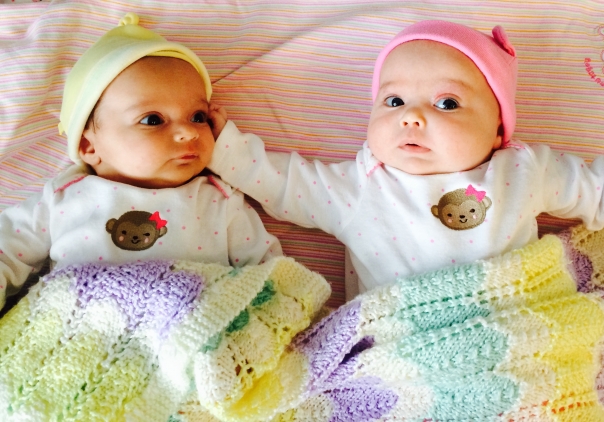 The clouds started to part as my hormones leveled out and I began to feel joy again.  The girls were thriving and rarely even fussed.  You bet I enjoyed the perks of bottle-feeding.  Propping them up for feeds (which they prefer) and watching others feed them including our older kids.  I have an incredible bond with our twin girls.  Of course it’s different from the bond I have from our older kids, just like my bond is different between my two oldest.  Occasionally I’ll feel a pang of guilt as I watch them gobbling down a bottle propped up while I am trying to get dinner on the table for six people.  But then I think about how incredibly happy and social they are and frankly much more content than my older two ever were and I know that the choice I made was the right one.

Here’s the kicker: although I am so certain with my decision, I find myself picking and choosing which photos I post, avoiding photos of my girls having bottles in fear of breast feeding bullies coming after me with torches and pitch forks.  I have made the decision to post those photos.  As many of you know I am very active on social media, especially Instagram.  I will be posting the beautiful photos of my girls enjoying their bottles that don’t hurt their tummies and bring them so much joy under the hashtag #thebottleisbeautiful.  I Invite you to follow me on Instagram and if you have bottle fed your baby/babies add your beautiful bottle feeding photos with #thebottleisbeautiful.  Let’s stop bottle shaming now. 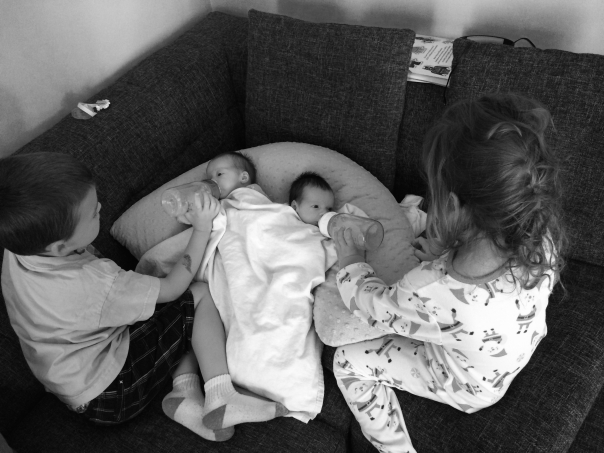 12 thoughts on “Postpartum Depression, Fructose Intolerance And Why I Stopped Breastfeeding Our Twins”