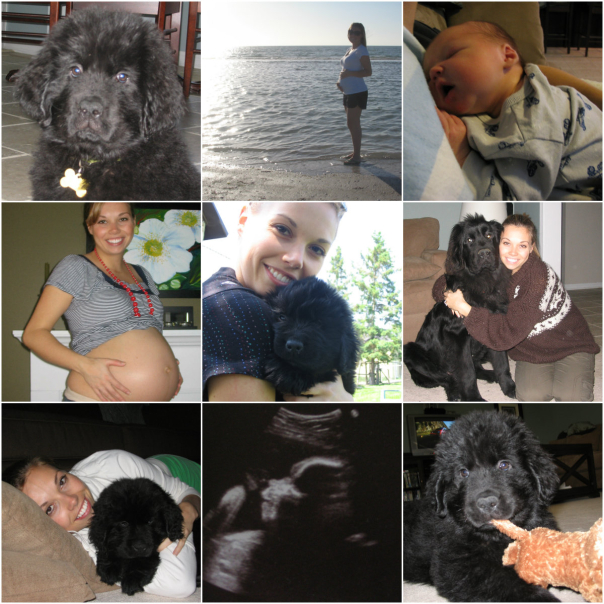 Grab your tissues, this one’s a tear jerker.

Parenting is a journey.  You can plan all you want and think you have it all, but life will always throw you curve balls.  What you do with those unexpected turns in your journey is up to you.  But if you can walk through the fire and come out the other side with extra arsenal including real life experiences you can draw from in teaching moments, knowing your own strength, having perspective and having your relationship with your significant other not only survive but grow, you will learn to embrace those difficult experiences.

Rewind seven years.  Mike and I had been married for one year and were ready to start a family.   No, we were not quite ready to have a baby, but we had puppy fever.  We had dated for many years before getting married and had always dreamed about getting a big, black, fluffy Newfoundland.  We had done tons of research and knew we wanted a giant breed that was low energy and great with kids, (think Nana from Peter Pan).

The time had finally arrived.  We had settled into our home, created a routine and were ready to add a new member to our family.  After lots of research we found a reputable breeder and drove six hours away to pick out our puppy… actually he picked us.  We drove up to a picturesque country home and were guided to a fenced in area where ten black balls of fur were either sleeping or clumsily waddling around. 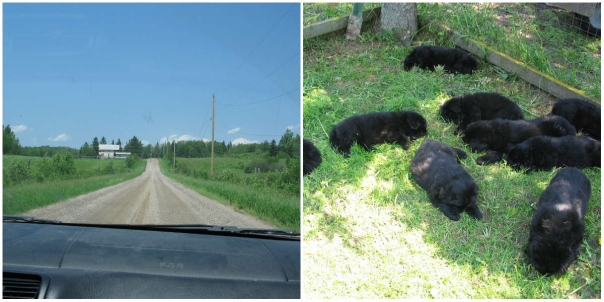 We crouched down and a confident male pup strutted towards us, looked right into our eyes and plopped himself right down into my lap.  That was our puppy, who we named Kane. 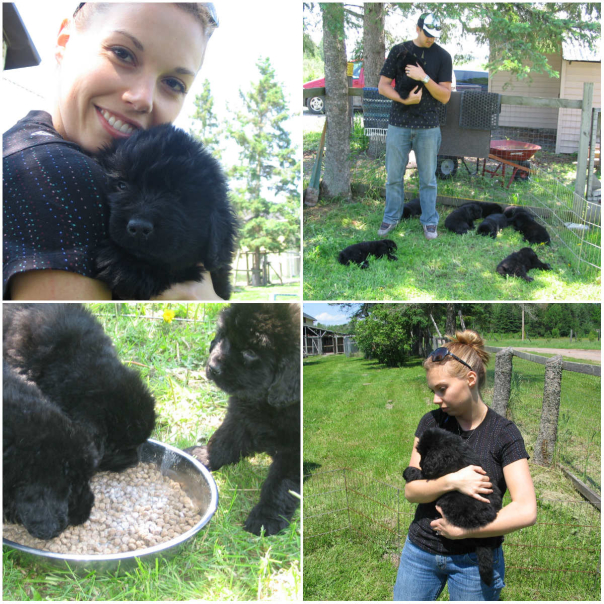 Kane was our world and we spoiled him rotten.  He was like our son and truly was a member of our family.  Sure, he drove us crazy because true to male Newfs, he took forever to potty train.  But we adored him anyways.  He was a sweet and sensitive, rapidly growing pup and had almost human-like personality traits.  While all of the other puppies were being wild and crazy at his puppy school he would stay back and watch feeling slightly overwhelmed (despite being the largest puppy).  He would glance up at us as if to say “I don’t want to break the rules like those crazy dogs.” 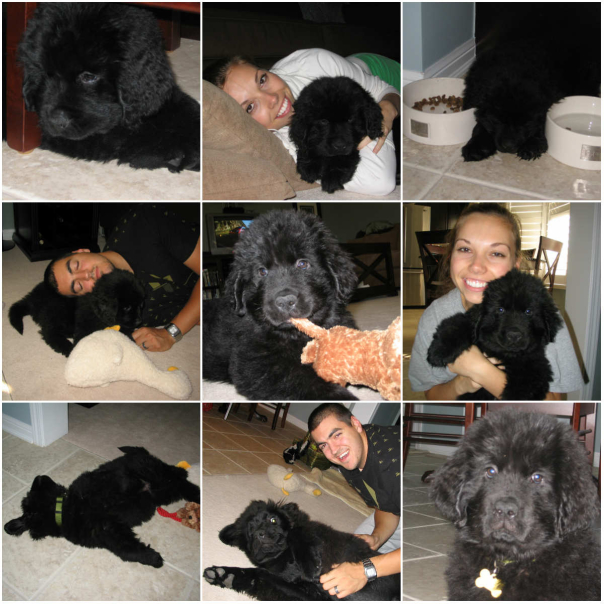 A few months after welcoming Kane into our family we got the baby bug… big time.  After barely trying we were thrilled to find out I was pregnant.  We were over the moon that our perfect little family that we had been dreaming about for so many years was becoming a reality.  We had it all.

Kane even started to sit beside the couch I would lay on every night and stand guard.  He too was waiting for his sibling to arrive.

One day, when Kane six months old and tipping the scale at 95 lbs I noticed him wobble when he walked out of his crate.  Hmmm…. that was odd, I thought to myself.  I shook it off, finished my morning routine and headed off to work.  The entire day that image of Kane’s hips wobbling haunted me.  In my gut I knew something was off.  In the days that followed that wobble turned into falling multiple times a day.  Mike was working long hours back then and I was the main person home with Kane.

One quiet Saturday morning while Mike was working a weekend shift and Kane and I were enjoying a lazy day, my world changed forever.  I was lounging on the couch and Kane was fast asleep in his favourite spot near our kitchen table.  Suddenly there was this loud thumping.  I ran over to Kane and quickly realized his was having a grand mal seizure.  He was violently convulsing and biting the air.  It was horrible to witness and I felt helpless.  I frantically called Mike sobbing.  The seizure eventually slowed and morphed into a dazed and frightened over-sized puppy.

The days that followed, Kane suffered one grand mal seizure after another.  We carted him to multiple vets trying to get answers, find a remedy and spending whatever money it took to fix our boy.  I was witness to so many seizures that I actually go used to administering his medication after, but the one seizure Mike was present for traumatized him beyond what he expected.  I was exhausted, but my pregnancy was the furthest thing from my mind.

We eventually were able to control Kane’s grand mal seizures with medication but then came the focal seizures… every 2 minutes.  When Kane would have a focal or absent seizure he would just click out momentarily completely spacing out often taking a nose dive into his toy basket.  I was starting to lose hope.  We were told that Kane probably had an inoperable brain tumour but it was going to take thousands of dollars to confirm.  Regardless, there was nothing we could do.  We had spent the better half of our savings at that point on Kane.  Then one day Mike came home from work and Kane didn’t recognize him at all.  He ran away from Mike and hid behind me in fear.  The soon-to-be mama in me knew that this was a recipe for disaster.  It was at that point that we had to make one of the hardest decisions of our lives.  To euthanize Kane.  We called the breeder and the vet to see if there was any other options, but each agreed that this was the right and most humane decision.

The date was set, ironically for the evening before my 12 week ultrasound.  The circle of life.  Here is a letter I wrote to our baby:

Dear Baby,   Your father and I are having to make a very hard decision this week.  We are going to be putting our 7 month old Newfoundland puppy to sleep.  It pains us to do this but he is very sick.  We need to put you first.  One day we will tell you all about him, how he was so sensitive and sweet, curious and protective.  We got this specific dog because they are known to be the best around children and babies.  We had a lot of plans for him which we won’t see realized.  But we truly believe everything happens for a reason.  I thank God everyday that you are on your way.  You are what keeps me going right now.  Anytime I start to despair or panic, I picture you.  Even though we haven’t met yet I already have so much love for you.  One day we will get another puppy, but right now you are our focus.  We want to be able to devote ourselves 100% to you.  We can’t wait to meet you.

Mike was incredibly brave and took Kane and was with him every second.  I couldn’t.  I stayed at my parent’s house sobbing while my mom held me.  Mike laid on the ground with Kane, petting him, while he departed from this world.  He later told me that he listened to Over The Rainbow by Israel “Iz” Kamakawiwo’ole on repeat the whole drive to the vet with Kane.  I still can’t listen to that song without choking up. 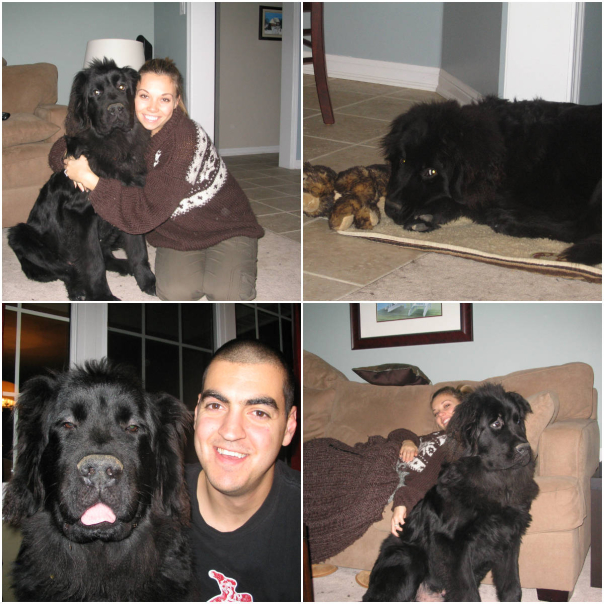 Our last evening with Kane.  Note our puffy eyes from crying.

The next day we went to our ultrasound feeling extremely fragile and vulnerable.  We had a lot of healing to do but at least we could switch our focus to our baby.  Thankfully we had a trip to Florida already planned for the few weeks following Kane’s passing.  It was refreshing to get away and take our minds off of our loss. 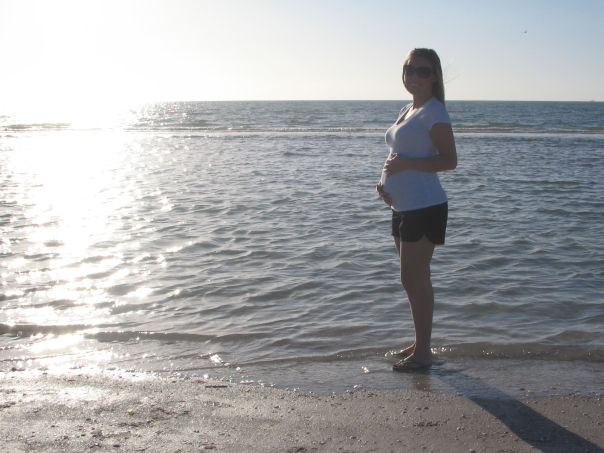 Once we arrived home from our trip we were still wrestling with a mix of emotions.  I was able to now feel our little bundle kicking inside of me which was a great constant reminder, but Mike was really struggling.  My 18 week ultrasound finally came and we found out we were having a little boy.  We were ecstatic!

Then, one Sunday morning during my 24th week of pregnancy, the phone rang.  It was my family doctor.  My heart immediately dropped.  Why was my family doctor phoning me on a Sunday?  She started to explain that she wanted to discuss something about my pregnancy before I switched from her to my OB that week (which was protocol).  She told me that our baby had a two vessel cord (a single umbilical artery).

When I got off the phone I was as white as a ghost and sobbed for hours.  Mike and I were both already so fragile and on high alert that we could not rationally process this information.  We felt like we were standing in an ocean with waves that kept crashing into us and pulling us down.  We were basket cases for the rest of my pregnancy only relaxing a little each time we had an additional ultrasound done confirming everything else was fine. 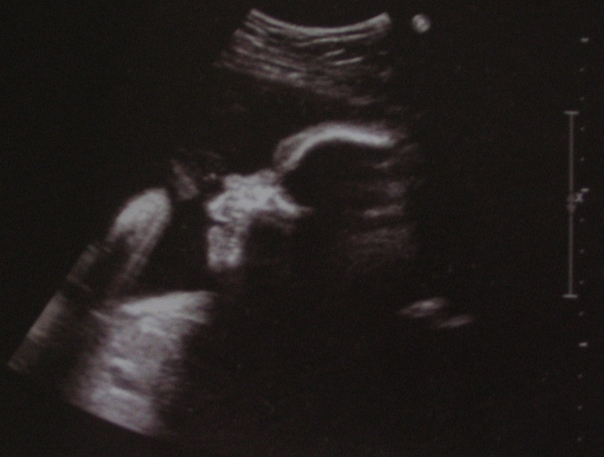 We did our best to enjoy decorating our son’s nursery, celebrating at my baby showers and preparing as my due date approached.  But we each knew how quickly someone who you love so much could just slip away leaving you feeling helpless. 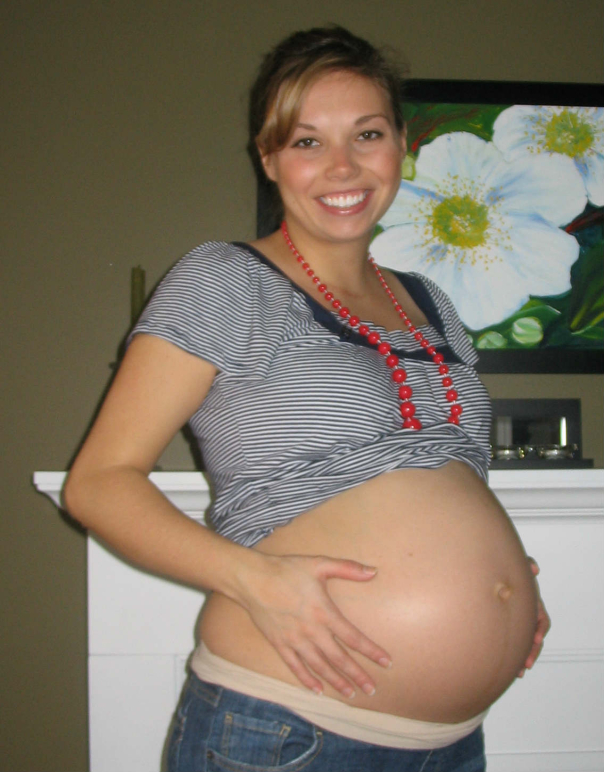 The day finally arrived and we welcomed our beautiful and healthy son Holden into our lives.  I had relaxed at that point and started to become a very easy going parent knowing to make the best of every second and to not sweat the small stuff.  It’s put things into perspective for me and helped me not obsess over every parenting decision, injury and little mistake I might make along the way.  I know now that I can’t control the future.  I can only do my best and be okay when things might not always go as planned.  Mike on the other hand has had an opposite reaction to Kane’s death.  At times he’s found himself having an irrational fear that Holden might become gravely ill, and he’d be rendered helpless (something he has never experienced with our daughters).  Over time Mike and I have been able to heal and come to terms with losing the first member of our family.  But it has impacted our parenting styles.  This unfortunately hasn’t been the hardest journey we have been though, but I believe that this hurdle helped prepare us for what was ahead.  Giving us the strength in ourselves and in our marriage to be able to cope.

I have sometimes wondered if Kane really did choose us.  To love him like crazy for his short life and help him depart with minimal suffering and immeasurable devotion.  I don’t believe in reincarnation but our little Holden is such a sweet, sensitive, compassionate soul that loves to follow the rules.  It’s hard not to compare him to Kane.  We have never regretted our decision and know that it was the right one.  But I think if you looked closely at our hearts you would see this jagged, thick, strong scar where a hole once resided. 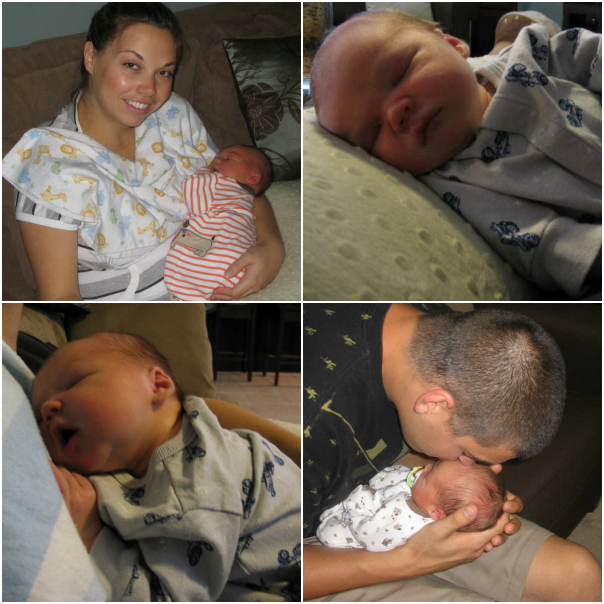