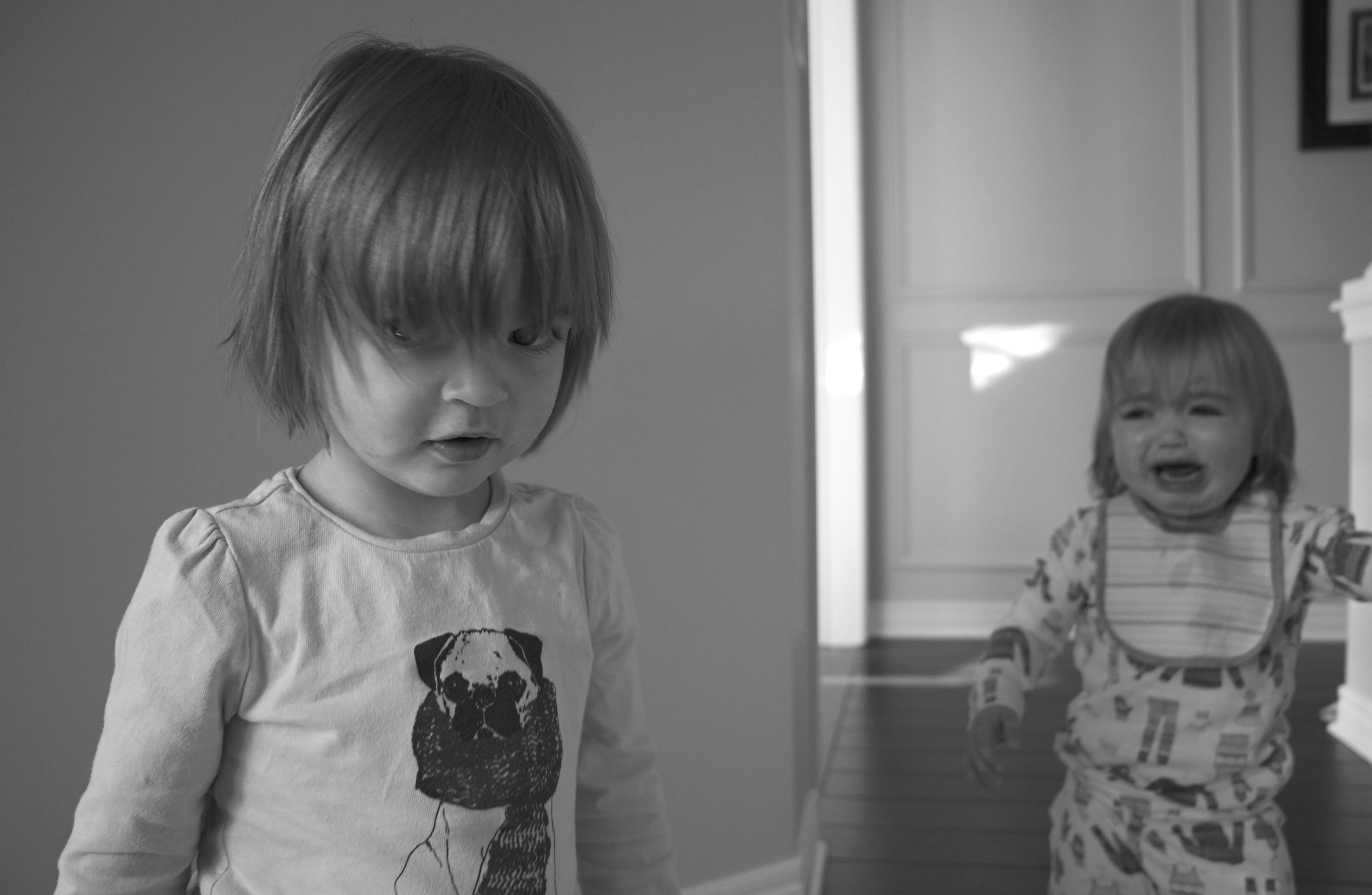 Hand, Foot and Mouth Disease (HFM) is the WORST. I have four kids, and over my six years as a parent we have experienced chicken pox, countless stomach flus, colds, roseola, and a handful of injuries. But the past week of each of our twins having HFM has felt almost biblical.

Apparently not every experience with HFM is as bad as we’ve had it, and as far as pain goes, we have been the lucky winners.

Let’s back up a week. After a weekend of one of Everly acting “off” and cranky, she spiked a fever on the Monday. I had been suspicious that it was HFM because her daycare was experiencing a full blown outbreak. The only thing was, she didn’t have any of the typical blisters around her mouth, hands or feet, which goes hand in hand with HFM (hence it’s name). 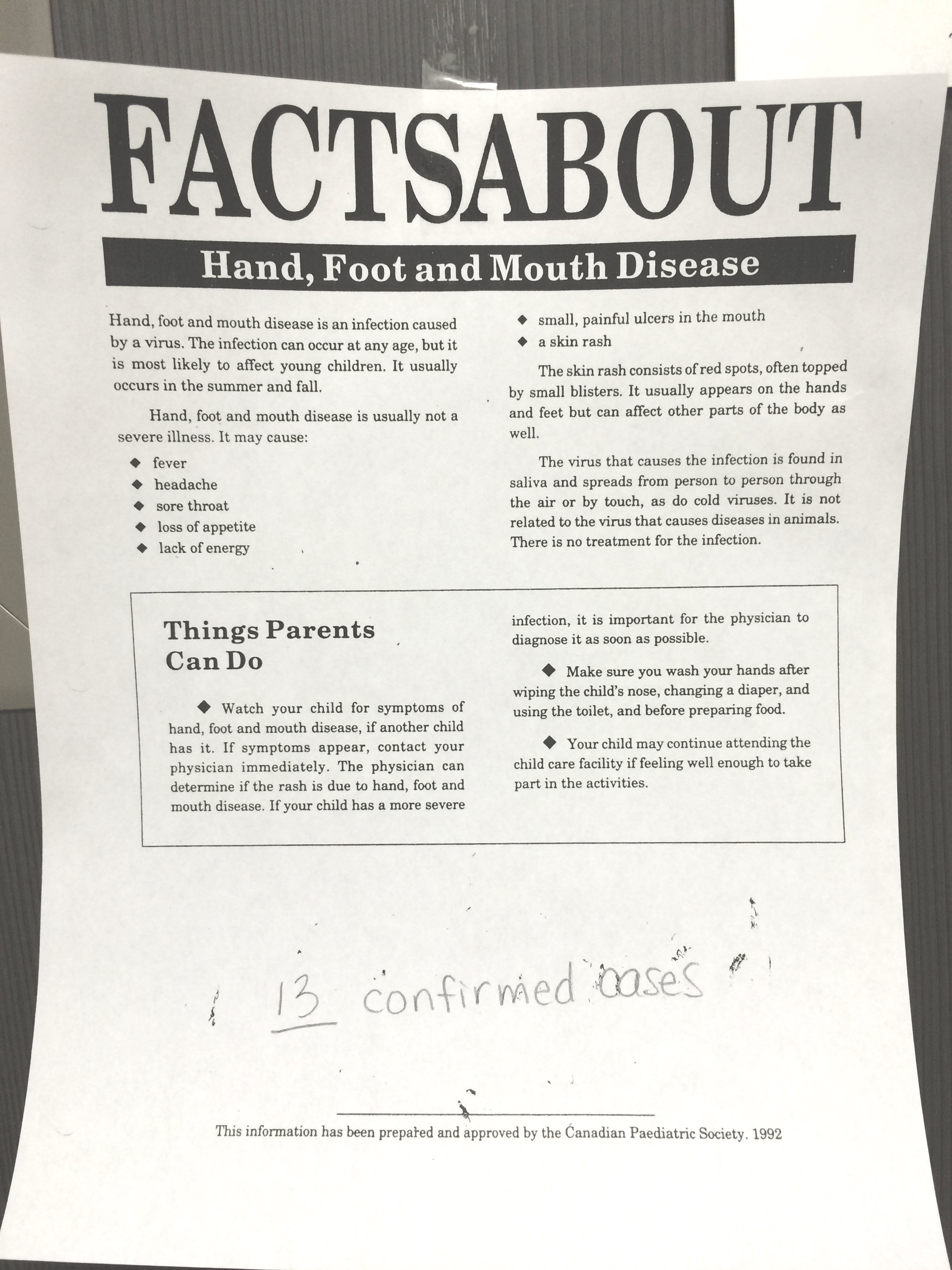 The sign hanging on the door at Mia and Everly’s daycare. Not what a mom wants to see.

By the Tuesday Evening I was racing Everly to the ER, because she was inconsolable. Her fever had broken the day before, but she wasn’t sleeping and was crying all. of. the. time.

After a thorough check-up, the doctor finally found blisters on the roof of her mouth. HFM blisters look like little pimples. Mystery solved. What could we do for her? Give her Advil and Tylenol (on a rotation) every three hours and wait it out. HFM is viral. It cannot be treated by antibiotics. To read more, here is a great article from Baby Center.

It was a long week of crying, but by the Friday, she was finally back to herself. We thought HFM was behind us and Everly’s twin Mia had dodged a bullet, but we were so wrong.

On Saturday morning, after a fussy night, I suspected the worst. Sure enough, Mia had the ominous fever. My husband, Mike, and I braced for what we knew was coming: a couple sleepless nights and a lot of crying. 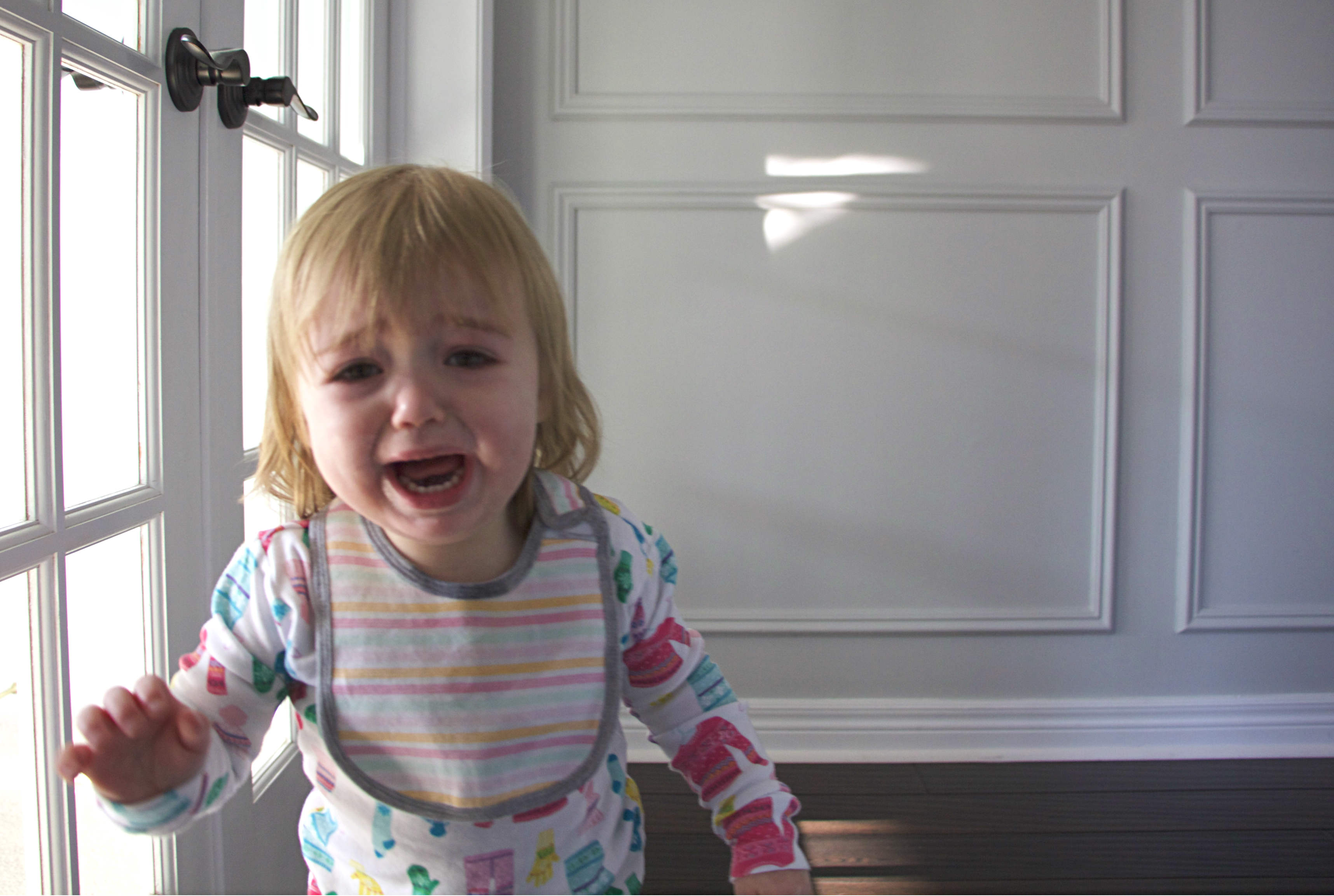 By Sunday, Mia had a full body rash, concentrated around her mouth, on her arms, feet and the worst area being her thighs, torso and bum. In fact, I have read that having the rash around the buttocks is very common. 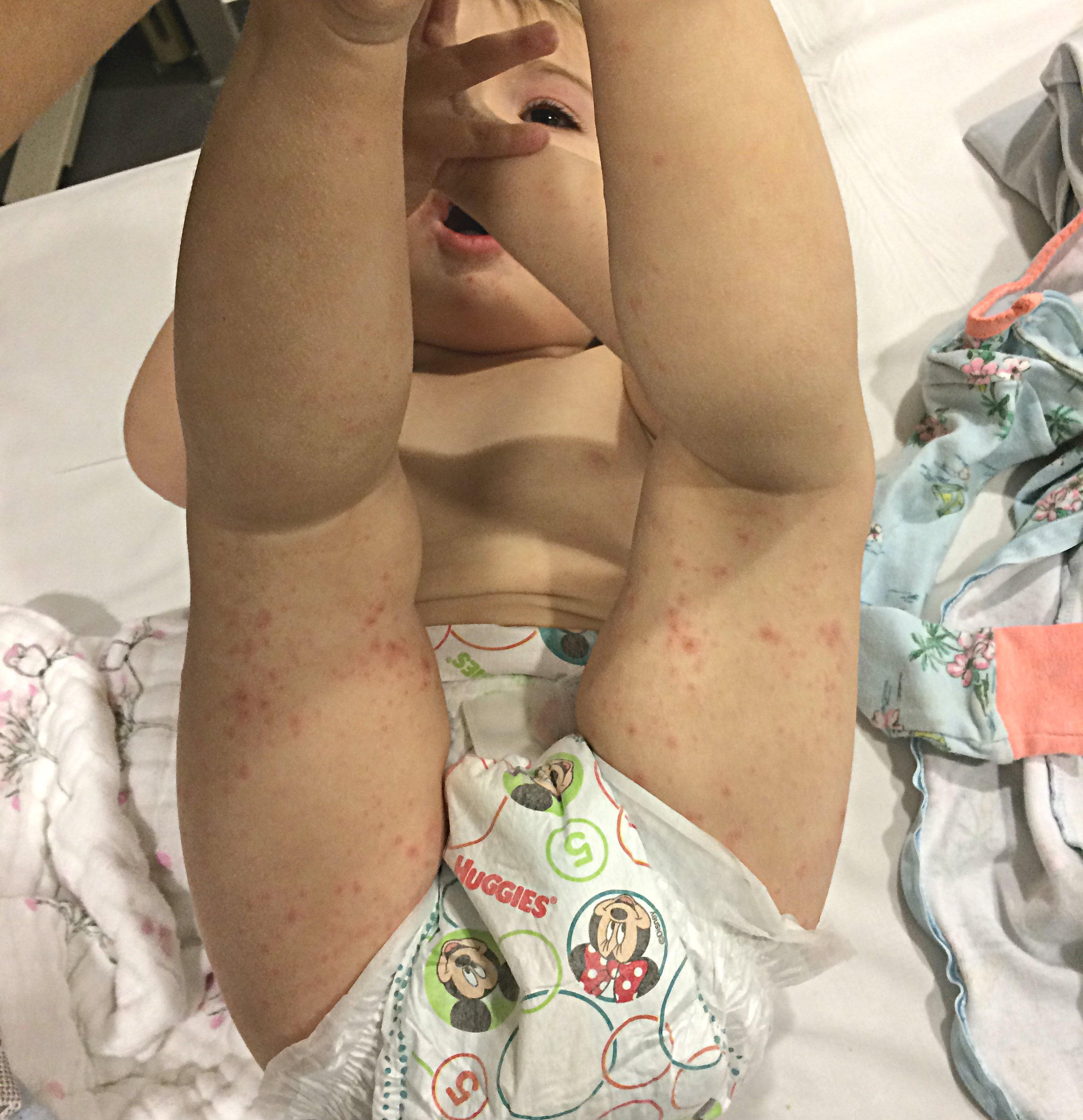 While Mike and I were heading to bed, after all four kids had been a asleep for a couple hours, I had an unsettling realization. Mia barely drank anything since that morning. Every time we had offered her a drink, she would push it away because her mouth was so sore. In fact, she hadn’t had a wet diaper since 2pm. This was concerning, and we knew that a trip to the ER was waiting for us in the morning hours.

That night was brutal to get through. Mia screamed the entire time, and wanted me to hold her constantly. By 2 a.m. I was about to race to the hospital with Mia, but she suddenly started to take sips of her water, so we decided to try to grab some sleep and put off the hospital until a more friendly hour.

5:50 a.m. Mia woke up wailing and she wouldn’t stop. She insisted that I hold her all of the time (picture a Gorilla and her baby). I should point out, she is 25 pounds and I am a short, teeny tiny person with a history of back problems. As much as I would love to say I am an expert baby wearer, that is not the case. Oh, and have you ever gone to the bathroom while a person is sitting on your lap? It’s quite the experience, you should try it sometime. 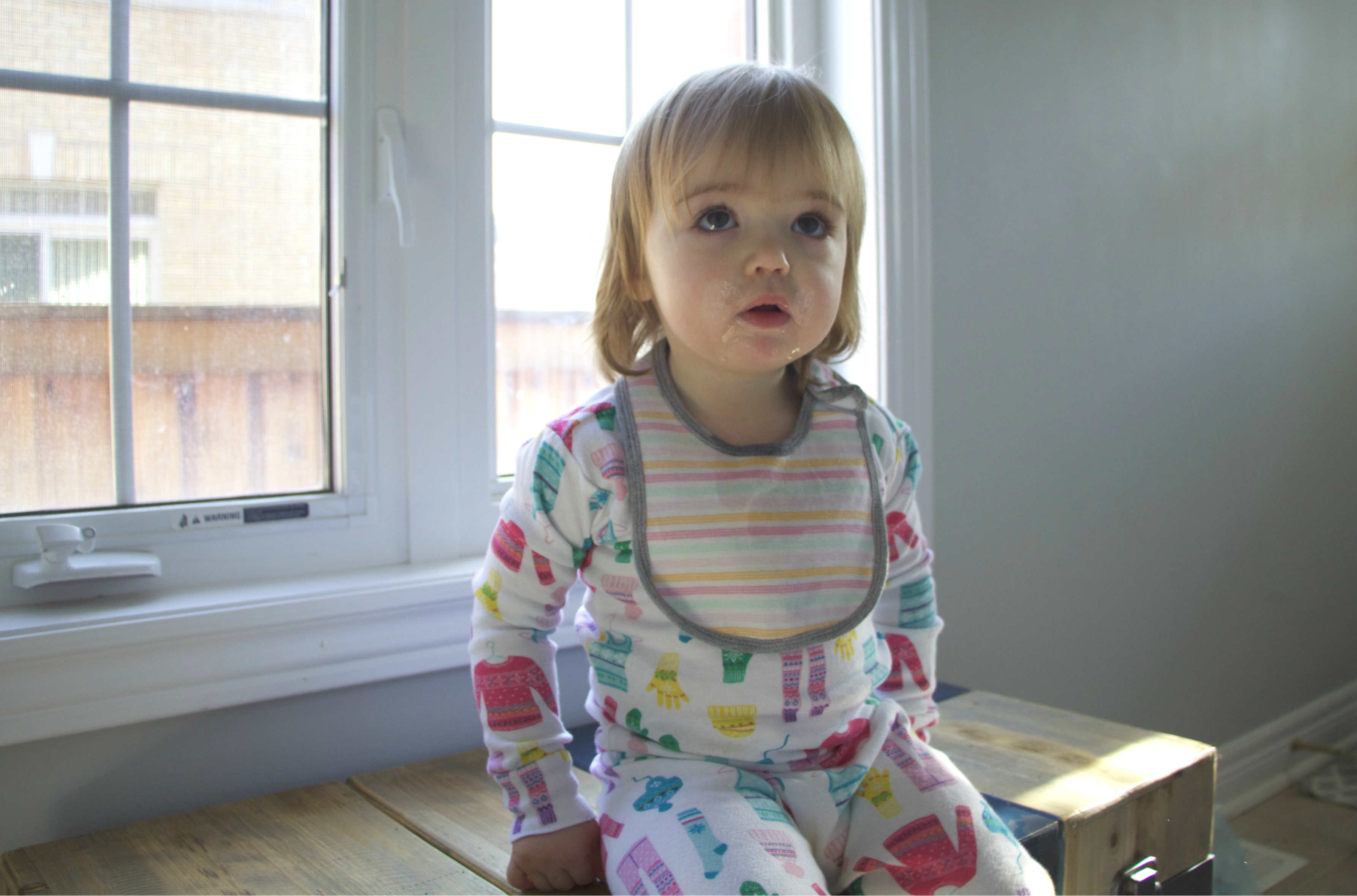 The white stuff on Mia’s face is Calamine lotion… which helped a lot with the blisters. Both twins drooled a lot. I think because it hurts too much to swallow.

I headed with Mia to the hospital, ready for her to be admitted for dehydration. But luckily, by the time we arrived she had turned a corner. Mia started eating, and taking more sips of water. Once the doctor got to us, Mia had produced the most beautiful wet diaper I have ever changed. We were sent home, instructed to keep doing what we are doing, and once again, wait it out. 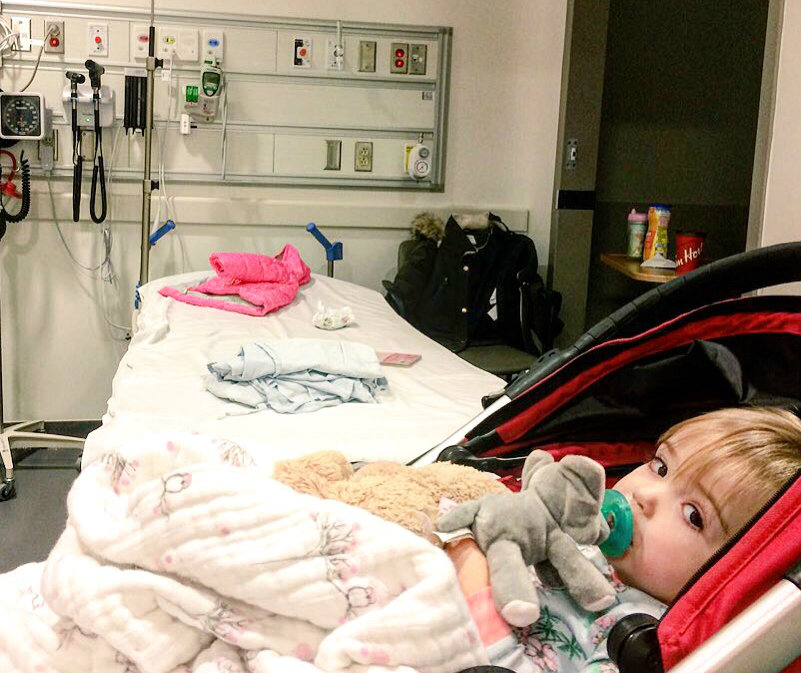 Mia in the emergency room. Not impressed.

While at the emergency room, a triage nurse was telling me that she and her son had had HFM before, and she was able to describe what the pain felt like: She said that her blisters went all the way down her throat, and the pain was so bad, she was prescribed codeine. The blisters on her hands and feet felt like… you know when your foot has fallen asleep and as the feeling comes back, it can feel like pins and needles? The blisters feel like pins and needles all of the time. She said that putting pressure on it, like wearing gloves, made the sensation a little more bearable. Oh, and her toenails also fell off, which apparently is also very common.

So here we are. Mia is napping, our house is trashed, and Mike and I are feeling like we have been hit by trucks. We are praying that this is the end of HFM for our home. I am not sure if we can take anymore… mercy! Mercy!

Here are some tips from some of my friends which I plan to try with Mia:

42 thoughts on “Hand, Foot And Mouth Disease: A Double Whammy And What It’s Really Like”